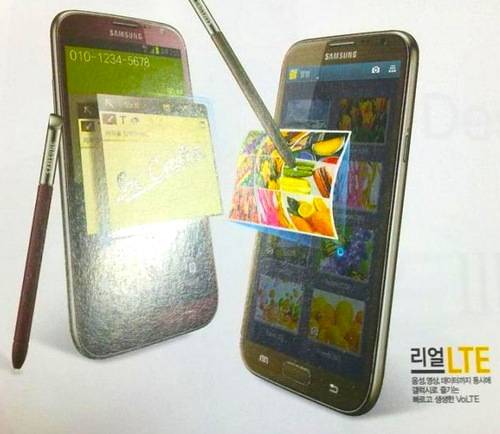 Samsung’s Galaxy S III is now available in a wide array of colors after initially launching with only two. The same situation apparently has played out for their impressive Galaxy Note II 5.5-inch smartphone tablet hybrid. After hitting the shelves in Pearl White or Titanium Grey, it looks like Samsung’s set to offer a few new colors.

Samsung’s Galaxy Note II leaked last week in a new black color option, but we’ve been hearing that was just a faked image. Why you’d fake something so simple as a color beats me, but to each his own. Today however it appears that a real leak has surfaced showing the Galaxy Note II in two brand new colors.

The Galaxy S III was made available limited to AT&T in Garnet Red, and we could be seeing the same thing for the Note II. New images show the large smartphone in both the Red color option, as well as the recently introduced Amber Brown. Although the Note II won’t be Garnet Red, this is being called “Ruby Wine” and is a much darker red color.

According to Unwired View a Korean Ad had the image you see above, clearly showing Samsung preparing some new colors in their home country. In the coming weeks we could see the Note II offered in white, black, blue, as well as the red and brown shown here today. That or just buy a colorful flip case of your choice. Does the color matter to you, or will you just throw a case on it anyways?