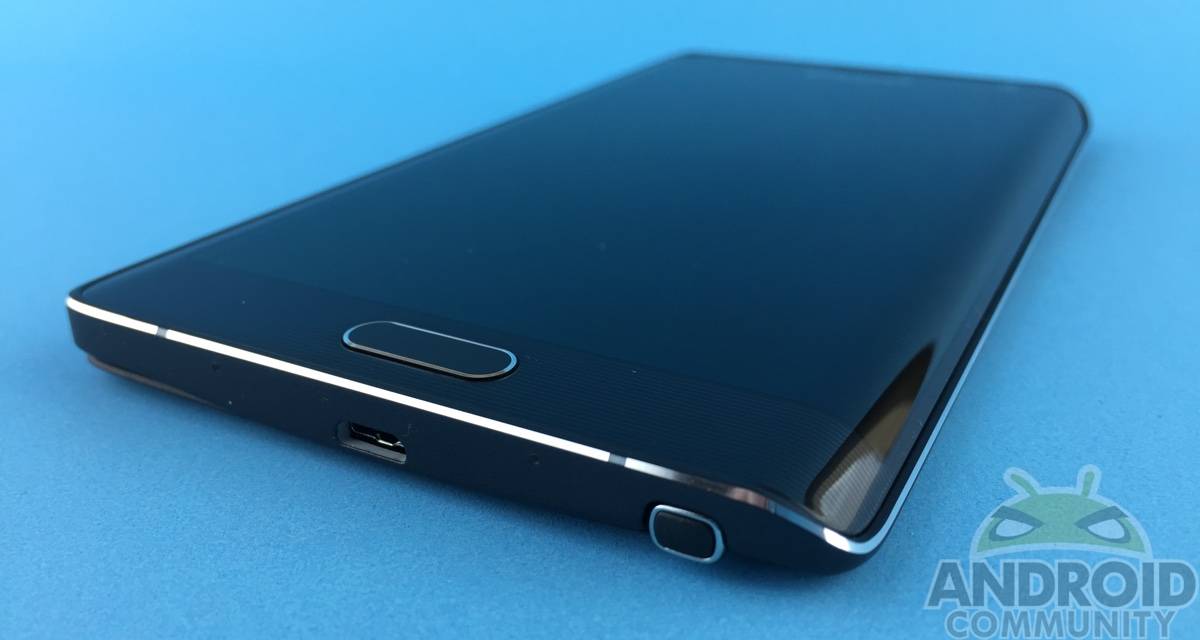 Among Samsung’s more ambitious devices, the Galaxy Note Edge is equal parts intrigue and confusion. The Note Edge occupies a space few other than Samsung dare to go in that it brings a new form factor that won’t appeal to the masses. In this niche is where Samsung takes their R&D to new heights, broadening their horizons in search of what’s next. Is the interesting Note Edge screen gimmick, though? Do you need a screen that peels off the edge? We’re about to find out.

I should probably start with a disclaimer, here. In this review, we won’t be concentrating on things that aren’t edgy, so to speak. For all intents and purposes, The Edge is a Galaxy Note 4 with a curved screen. If you need to know how we feel about things in Samsung’s big-phone space, I recommend you give our Note 4 review a read.

The only differences between the two are a slightly smaller screen on the Edge (really, one-tenth of an inch), and a battery that is just a scooch smaller.

Dispensing with that, here are the main specs for the Galaxy Note Edge:

On a positive note, there isn’t really and distortion to the pixels. They don’t look stretched around the side, and the curve isn’t part of some elaborate re-thinking of what your smartphone should do. Your apps aren’t going to suddenly curve around the side and confuse you. 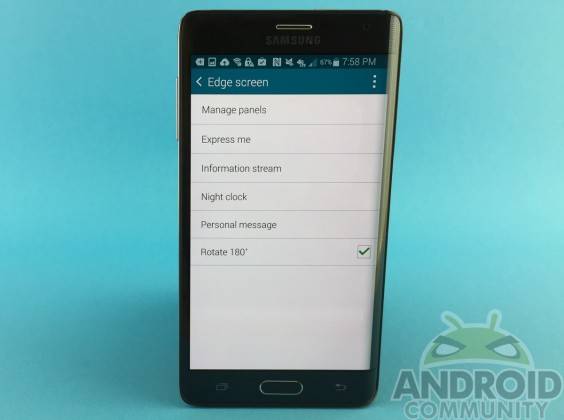 The curve is there to house favorite apps and quick-launch items. It also gives quick glances at the weather, or other info you might want to see.

Settings specifically for the Edge’s edgy screen attempt to make it a more personal experience throughout, showcasing its true intent as a secondary screen more than a wraparound for apps. In fact, when you’re in an app or webpage, the side goes dormant, displaying a message of your choosing or favorite apps. Keep in mind the curved portion of your screen will show up in screenshots, as you can see throughout this review. 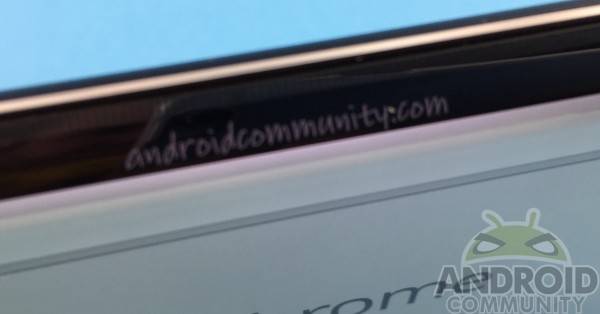 If there’s a rounded screen that isn’t available all the time, what’s it for? You can quick-launch favorite apps there, and even get some contextual info of your choosing. In that vein, the Note Edge is more like a smartphone-plus. I’ll explain.

The curved portion of the screen acts like more of a second screen than an extension of the one you’re going to look at most of the time. It takes things like apps you’d clutter your home screen with and gives them a home. You can still use the Note Edge like a regular phone, and put apps up front and center, but you don’t have to, now. 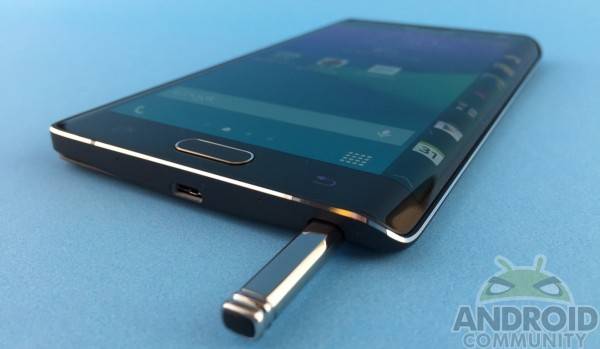 Samsung has set up a partition for apps and services, which seems downright gimmicky. A quick look around the web at other reviews points to that mindset as well, but I disagree. In fact, I think it’s brilliant — as a concept.

Having the “main” screen available for workhorse stuff or widgets is fantastic, and the ability to work or play but also get to apps you might want to navigate to quickly is awesome. For productivity-minded folks who really like Samsung’s split-screen utility, the app hot-launch functionality of the Edge’s screen is special.

Unfortunately — or wisely, I’m not sure yet — there are no third-party apps specifically targeting the Edge. It’s a niche device in an already niche market, but I can see use cases for the Edge’s “here when you need me” functionality.

Samsung has already tweaked a few of their apps to show why Edge is great. Camera controls bend around the side, and S Note shows why productivity geeks will love it, as tools shift to the edge. 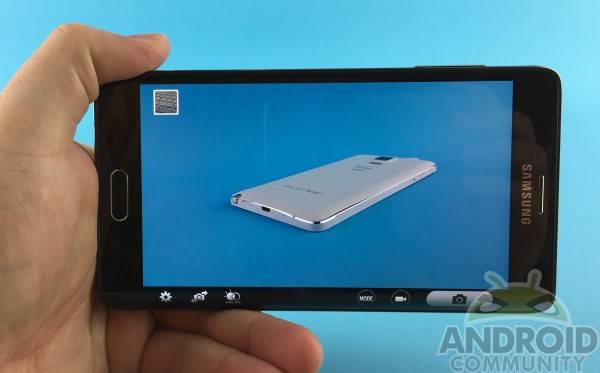 The Edge is cool, but not perfect. We appreciate it for what it is, though, and that’s a beta product. It’s unfortunately pretty bulky, which is a side effect of the curve itself.

The side-screen also displays notifications as side-scrolling text if you look at it in portrait mode, or just goes dark with a feint message of your choosing. I also found the device slow to recognize it was in landscape. It’s a neat device to sit on the desk or nightstand, because the edge-y screen can serve as a clock/notification center, but there were a few times it just didn’t want to realize it was in landscape and on the desk. 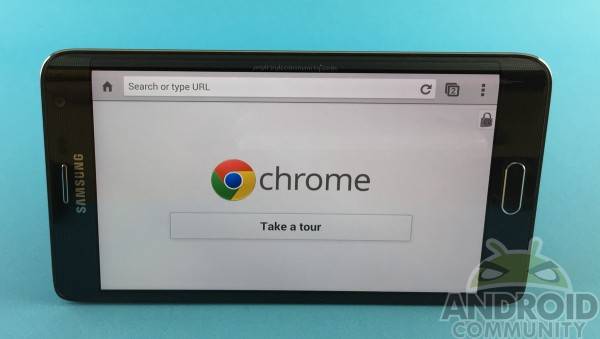 Also, I’m left handed; the Note Edge’s curvature is on the right side (in portrait). There’s a “Rotate 180-degrees” mode, but that leaves the home button and static software buttons for recents and back up top. And upside down. Not elegant, Samsung. Luckily, I just don’t consider this a one-handed device, so my left-handedness bothered me much less than it could have.

The Note Edge is a great phone. It’s based on another great phone, the Note 4, so that’s not a hard call.

To say the Edge’s screen is a “gimmick” is doing it a disservice. A gimmick implies trickery simply to get attention. The Edge’s screen has some unique aspects that may have you enjoying it more than you thought you would.

The quick-launching of apps is cool, and having it on the desk as a notification/clock display is neat. Shoving camera settings to the bottom curve isn’t really all that good, but it shows what the Edge can do for you. While I didn’t enjoy the settings being on this odd curve, I really did like having the entire main screen as a viewfinder. 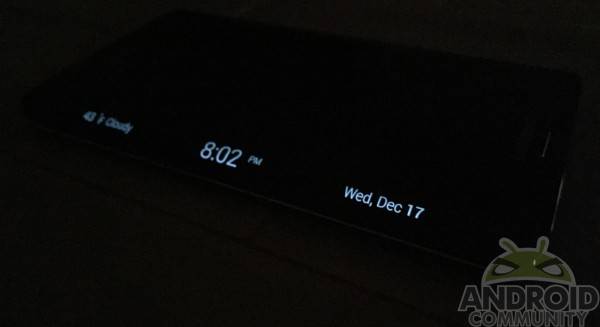 The Note Edge is forward-thinking, but also hedges a bet for you. While you get a screen that’s more unique than any you’ve seen before, you sacrifice nothing. Anything you do with the Edge’s side-screen is additional, and only adds to the experience.

As I said at the jump, the Edge’s screen isn’t a re-imagining of the smartphone. It’s just the next step.

The Note Edge is also reminiscent of the original Note from Samsung. When it launched, we collectively said “really, Samsung? Really?” in response to their big screen. Now, everyone is following suit (even Google!), and websites everywhere are considering the Note 4 for their year-end “device of the year” articles.

Though the Note Edge is weird, it’s probably the future. Will we be considering the Note Edge 4 for device of the year someday? As strange as it sounds, I can see it happening. The Note Edge needs refining, but Samsung might really be onto something, here.

The only question now is if you’re an early adopter. If you are, give the Note Edge a good, hard look when you want a new phone. I think you’ll be impressed by all the subtle, cool things it can do. I know I was.