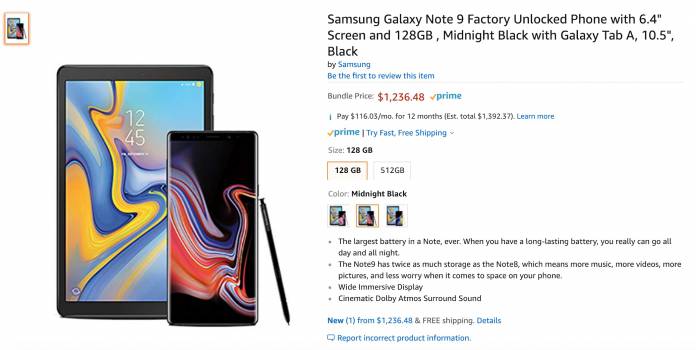 Since Samsung will be announcing a new flagship line by next week at their Unpacked event, they probably want to work on getting rid of all the stocks of the current flagship. One way would be to offer great deals through their retail partners like Amazon. Now as part of their Deal of the Day, Amazon is offering a free Samsung Galaxy Tab A when you purchase an unlocked version of the Galaxy Note 9, both the 128GB and 528GB variants.

The Galaxy Note 9 does not have a discount but adding the Galaxy Tab A may actually be an attractive deal for those that are looking for both a new phablet and a new tablet. You will be able to get the deal for the other color variants of the device like the Midnight Black, Lavender Purple, and Ocean Blue.

If you need a refresher on the Galaxy Tab A, it has a 10.5-inch IPS display with a 1920 x 1200 resolution and is powered by a Qualcomm Snapdragon 450 processor. It has 3GB RAM and 32GB internal storage and is running on Android 8.1 Oreo. It also has a 7300mAh battery and quad speakers. The specs aren’t particularly awesome but decent for a tablet.

As for the Galaxy Note 9, we of course have known a lot about it for the past few months. It has a 6.4-inch AMOLED display with 2960 x 1440 resolution, powered by a Qualcomm Snapdragon 845 processor. It has either a 6GB or 8GB RAM and the aforementioned 128GB or 512GB of storage. It has a 4,000mAh battery and is running on Android 9 Pie.

This deal will probably expire pretty soon so if you want to avail of it, then better get your credit card out and purchase it through Amazon. The 128GB variant costs $999.99 while the 256GB one costs $1,049.99.