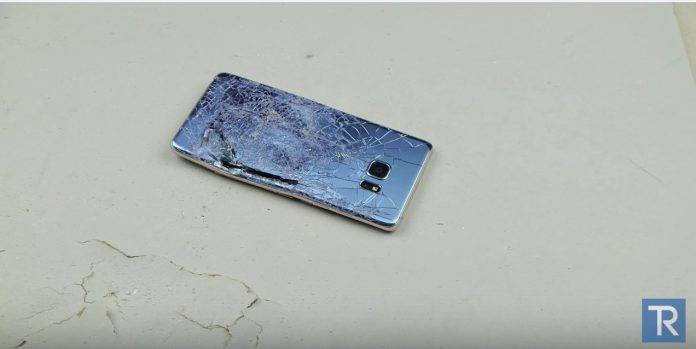 If you feel really queasy on seeing a brand new smartphones be repeatedly hit by a hammer and scratched by a knife, better turn away now. YouTube channel TechRax has conducted a test once again, this time on the newly released Samsung Galaxy Note 7, which boasts that it is the first smartphone to carry the Gorilla Glass 5, supposedly the strongest among its predecessors. So did the new phablet from the Korean OEM survive this brutal test and prove that it is indeed that durable?

Well, yes and no. With the knife test, the Gorilla Glass 5 definitely proved that it is durable, at least with the front of the Galaxy Note 7. Both the hitting of the device with a knife and the scratching of it did not damage the phablet at all. But when it comes to the rear glass shell, TechRax just hit it with the knife a few times and the cracks were pretty far-reaching. So does this mean that the back isn’t protected by Gorilla Glass 5? We have yet to hear from Samsung about this.

As for the hammer test, which is infinitely more painful of course, the Note 7 can actually take quite a beating, after having the 2.5 lb hammer dropped on it, and then with TechRax just slowly beating it to death. Of course eventually the glass cracked and the device went bonkers, but it happened after quite a bit of hitting. So unless you plan to constantly have your Note 7 hit by a hammer of sorts, then you should be good.

The Galaxy Note 7 is now available in several markets, including the US, Canada Mexico, Puerto Rico, Australia, New Zealand, Singapore, Taiwan, the UAE and South Korea. It has met with relatively good reviews, although there may be some issues with the S Pen and light slipping out of the metal edge.