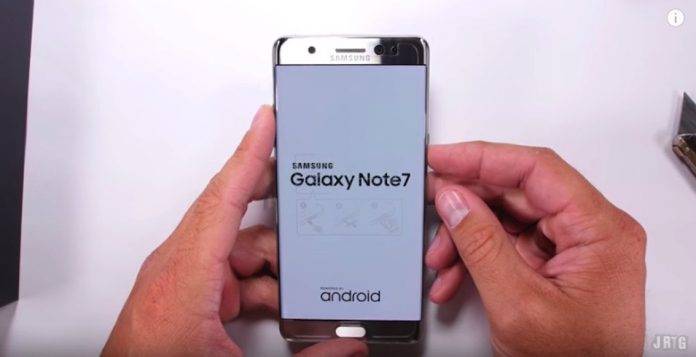 The Samsung Galaxy Note 7 is finally available in key markets all over the world. In the US, pre-orders are being shipped out already and anyone can grab a unit at most mobile carriers and retail stores. The South Korean tech giant is expecting the new phablet will be another bestseller, hitting about three million next quarter.

Zac Nelson said that it’s important that we know first what to expect from a phone especially this one that costs almost a thousand dollars. The point of such durability test videos is not to degrade any company for failing the test but it’s more for the knowledge of the consumers.

This Note 7 especially is highly anticipated because it already uses Gorilla Glass 5 screen. Hopefully, the phone will be scratched at a higher level than 6 where most smartphones usually start to scratch. Surprisingly, the Note 7 scratches as early as level 3. That’s interesting because this is the latest Gorilla Glass. It’s shatter-resistant alright but apparently, it’s not as scratch-resistant. There’s a difference. This means Note 7 owners should consider getting a protection from the possible heavy scratching on the glass screen.

The phone’s build is all-metal for that premium feel. Even the buttons are made of metal so you know the phone is durable. The 12MP lens is made of glass while the S-Pen now pops out easily. The new S-Pen’s top and shaft area are made of plastic but the bottom is metal. The back panel is made of glass and is scratch-resistant.

Testing the screen under fire, the Galaxy Note 7 only turned white after some 8 seconds just like the previous S7 phones. Watch the complete video below:

Bending the Samsung Galaxy Note 7, there’s no effect. JerryRigEverything said that this Note 7 is a tank which means it can survive being sat on.