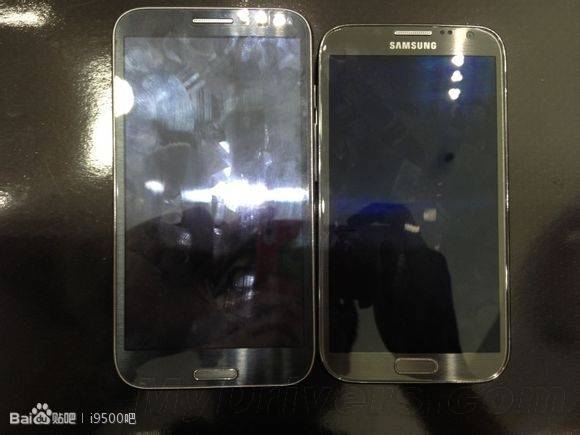 The folks from Samsung are preparing a pretty massive smartphone for later this year. Following their yearly upgrade cycle we’re expecting to see the Galaxy Note 3 be revealed sometime in September at IFA 2013, and until today we’ve been getting conflicting reports on the hardware. The leaked image below gives us an idea of what to expect, which is more of the same, only they’ve beefed up the internals again.

By what we’re seeing and hearing it sounds like Samsung will do the same with the Note 3 as they did with the GALAXY S 4. Upgrade the screen and internals, but keep the design language the same. We’ve heard a 6.3-inch Note 3 was coming, but the current leaks suggest 5.99-inches will in fact be the final size.

Rumors earlier this month “confirmed” Samsung was working on aluminum or premium hardware materials to replace their plastics, but according to the above image that won’t be happening anytime soon. The device looks like a larger Galaxy Note II. So with that in mind, lets talk about under the plastic design, which are some pretty impressive specs.

As the rumors suggest, Samsung will use a 5.99-inch 1920 x 1080p full HD display, then boost everything else under the hood too. Most importantly (or not, is this necessary?) Samsung will be adding 3GB of RAM to the Note 3. Yes, 3GB of RAM. The Galaxy Note 3 will run the newly announced Exynos 5 Octa 8-core processor clocked at 2.0 GHz on four cores, and 1.2 GHz on the other 4. Sounds like a beast right. 8-core smartphone with 3GB of RAM. That’s just nuts.

For now this hasn’t been confirmed, but given what we’ve seen lately from Samsung this could very well be what they unveil at IFA in a few months time. That’s one massive phone. Would you buy one?

Update: Seems it’s still too early to get excited about the Note 3 – Paul O’Brien points us in the direction of this Note 2 clone which looks to be the device in the image.