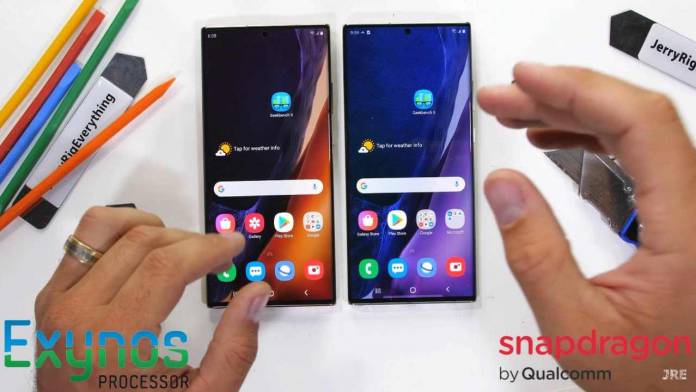 In ideal world conditions, a phone should have the exact same parts or have similar performance and act the same way in every situation. This is not so in the case of Samsung who are lately being pointed for the same. Samsung is selling its flagship Galaxy Note 20 Ultra in different regions of the world with a different processor and cooling systems. So, is there any difference in performance for both devices?

The temperatures of the phones however are quite similar, so the cooling systems work almost comparable. That said, the Exynos is a bit hotter than the Snapdragon version – 1-2 degrees more than the US variant. Since the test is processing-intensive, the battery consumption is also better in the Snapdragon model.

Thereafter, Jerry gets down to swapping the cooling systems on the phone by opening-up the two – kind of a teardown there. The graphite cooling system of the Qualcomm Snapdragon processor is exchanged with the copper cooling system for the load testing. Still, Qualcomm wins considerably as there is 20 percent difference in performance during the test.

After the comprehensive testing, the two Note 20 Ultra variants have a 5 percent battery difference which also comes as a disappointing surprise. Things are clear as Exynos version is not that powerful owing to the weaker processor. The phone acts differently, so why is it sold to the unassuming buyers as the same device which has the superior Snapdragon chip for the same price?