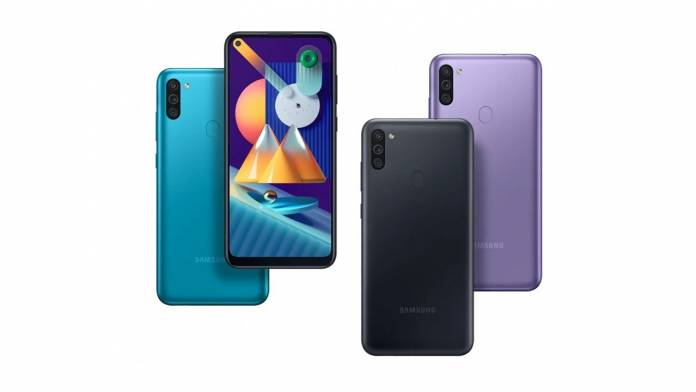 Samsung has launched two new budget smartphones in the Galaxy M series in India. The Galaxy M11 and Galaxy M01 are launched in the sub ₹15,000 ($200) market, which is the largest segment of smartphone takers in the country. Though Galaxy M11 with punch-hole display and triple rear cameras is a smartphone we have seen before when it debuted in UAE earlier this year, the Galaxy M01 with waterdrop-style display and dual rear cameras is seen for the first time.

Both the Galaxy M11 and Galaxy M01 smartphones run Android 10 with One UI out of the box. They come with Dolby ATOMS for surround sound experience and feature health app pre-installed to let users monitor their health 24×7. The phones will be available through Samsung, Amazon India, and Flipkart beginning June 2.

Galaxy M11 features a 6.4-inch HD+ Infinity-O display, which provides the phone with a distinct style in its segment. The phone comes with a 5,000 mAh battery with 15W fast charging to see you through a day without any hassle. The Galaxy M11 has a triple camera setup on the back that comprises a 13MP main shooter, 5MP ultra-wide camera with 115-degree field of view and a 2MP depth camera. On the front, the phone has an 8MP selfie camera.

For the Indian users on the go, the Galaxy M11 comes with “Alive Keyboard” that provides meaningful suggestions while typing in Hindi, Telugu, and Marathi. Featuring an octa-core Qualcomm Snapdragon 450 processor under the hood, the phone comes in two variants with fingerprint sensor at the back.

Galaxy M01 is the younger brother of the two. It features a 5.7-inch HD+ Infinity-V display powered by an octa-core Qualcomm Snapdragon 439 processor. For the optics, the phone has a dual rear camera setup on the back that includes a 13MP primary sensor and a 2MP secondary sensor. It has a 5-megapixel camera for selfies.

Available in 3GB + 32GB variant priced at ₹8,999 ($120), the phone is packed with a 4,000 mAh battery. This one also touts and expandable storage via MicroSD card to 512GB. It will roll out in black, blue and red color options to choose from. For connectivity, the phone includes 4G VoLTE, Micro-USB, and a 3.5mm headphone jack. It doesn’t have a fingerprint scanner.