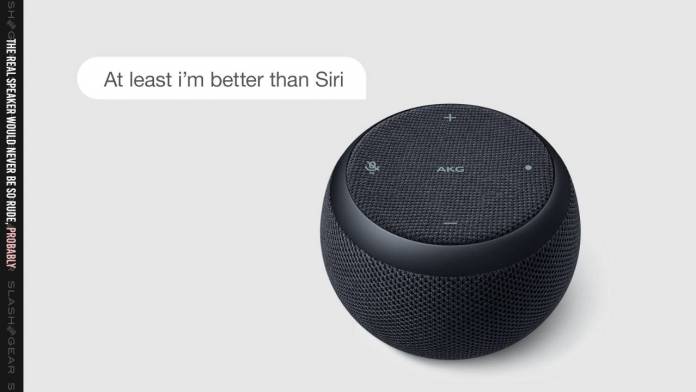 We’re supposed to be near the official announcement of Samsung’s first smart speaker, and now we have a leak of the Galaxy Home Mini. Reliable Twitter leaker Max Weinbach (whose verified account includes “enemy of Samsung” in its username) shows off the pre-launch speaker and what it can do that will let it compete with other more established smart speakers. Apparently, you can get it to say things like “At least I’m better than Siri” and you’ll be able to blast your commands within a 40-foot range.

Samsung is actually pretty late in the game as the market is already saturated with the likes of Amazon Echo, Apple HomePod, and Google Home, among others. Nevertheless, they are getting into it with their smart assistant Bixby and based on this massive pre-launch leak, they will be able to hold its own. The images show that the Galaxy Home Mini is close to the size of either the Google Home’s base part or the Amazon Echo spot.

The Galaxy Home Mini only has 2.4ghz WiFi. No 5ghz. pic.twitter.com/L5BaeoU2ci

Based on the sample video, you will also be able to make it say anything you want unless Bixby has some Siri-related insults built into its system. There are two voice styles available called Stephanie and Lisa. The speaker also doesn’t have a hardware line out but it does have Bluetooth support anyway so you can still use it as a regular, “non-smart” speaker if you want to. It also has speakers and microphones so you can use it as a speakerphone.

The Samsung Galaxy Home Mini will probably be announced during the event on February 11, alongside the new flagship smartphones and other devices. It is expected to be priced at around $99. Let’s see if this leak from an “enemy of Samsung” is actually true.