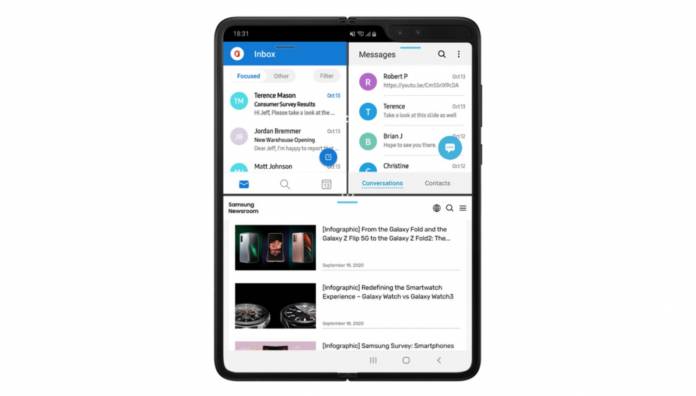 If you were one of the early adaptors that first got the Samsung Galaxy Fold a year ago, you might probably be thinking about upgrading to the newer dual screen foldable phone. But Samsung has a treat for you as the latest firmware update brings some of the important features that the Galaxy Z Fold 2 has, including some productivity and camera enhancement features. This is a good move by Samsung after updating the Galaxy Fold to Android 10 with One UI 2.1.

Probably the most major new feature that you get for your Samsung Galaxy Fold is called App Pair which lets you launch three apps at once. This is a boon for multitasking users who are not satisfied with switching between apps but want to have all three on the screen at once. You can access App Pair through the Edge panel which can already display up to 22 apps that you’ve already favorited.

You can choose your preferred split-screen layout in a Multi-Active window, which includes a horizontal option already. If you need a bigger screen, you can now also wirelessly connect your Galaxy Fold to your Smart TV through the Samsung DeX icon. You will be able to use your phone as a touchpad for the bigger screen since it has multi-finger gestures as well. You already have a dual-screen on your foldable device but in case you need something bigger, you at least have this option.

You will also get some of the camera capabilities that the Galaxy Z Fold 2 users are already enjoying. This includes Auto Framing which automatically detects and tracks how many people are in the photo, Capture View and Dual View to make it easier to view photos before you actually capture them, and Rear Cam Selfie which lets you use the rear camera for selfies so you can preview the image on the cover display.

Lastly, you’ll also get the Pro Video Mode so you can shoot 21:9 and 24fps videos. Oh, and you get to directly share WiFi passwords with other devices. If you have a Galaxy Fold device, update your software to the latest version so you can get all of these Galaxy Z Fold 2 features.