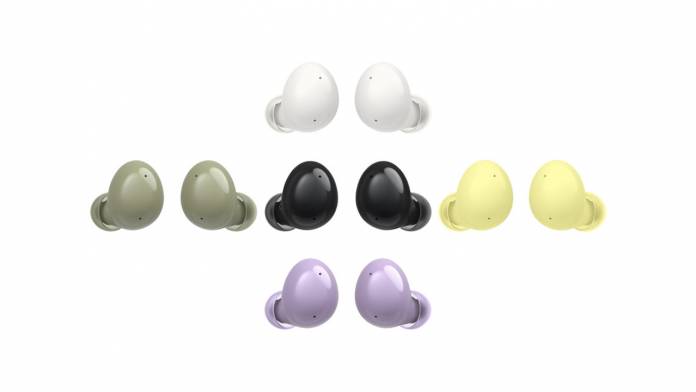 Even though we’re still a couple of weeks from the official launch of Samsung’s new devices, we probably know most of the details about the smartphones, smartwatches, and other devices that will be “Unpacked”. Most of the information comes from tipsters and leaksters but the latest one actually comes from Samsung itself, or rather its Galaxy Wearable app. Whether they unintentionally included the information on the latest beta release is still unconfirmed of course but at least now we have some “official” details about the truly wireless earbuds.

The Galaxy Wearable app update now has an empty or redacted changelog, even though we now know it added hypothetical support not just for the Galaxy Buds 2 but as well as the Galaxy Watch4 and the Galaxy Watch4 Classic. The app displays the five colors of the Galaxy Buds 2: black, grey/green, yellow, white, and purple. It also confirms that it will have Active Noise Cancellation although we’re not seeing ANC levels (high and low) for now so it might be more basic. Or they might add the levels later on.

But what we know, at least according to XDA Developers is that you can enable ANC in just one earbud. Actually, that option is still invisible on the app right now but it might show up once a certain firmware version is installed and detected. You can now also enable/disable some of the common actions individually: single-tap, double-tap, triple-tap, and touch and hold. There’s an interactive tutorial that will show you how to wear the earbuds correctly.

The app also indicates that each bud has a 61mAh battery and the case has a 472mAh battery. Since they seem to be similar to the Galaxy Buds Pro, then that means you’ll get 20 hours of listening time if you have ANC on and 28 hours if you turn it off. The battery dashboard has also been slightly redesigned. There are some features you can’t see here that’s with the Galaxy Buds Pro like 360-degree sound, outside double-tap volume controls, etc.

The Galaxy Wearable app is still pre-release so there might still be some changes that will happen before the Galaxy Buds 2 is officially launched. That will most likely happen on or after the rumored Unpacked event on August 11.