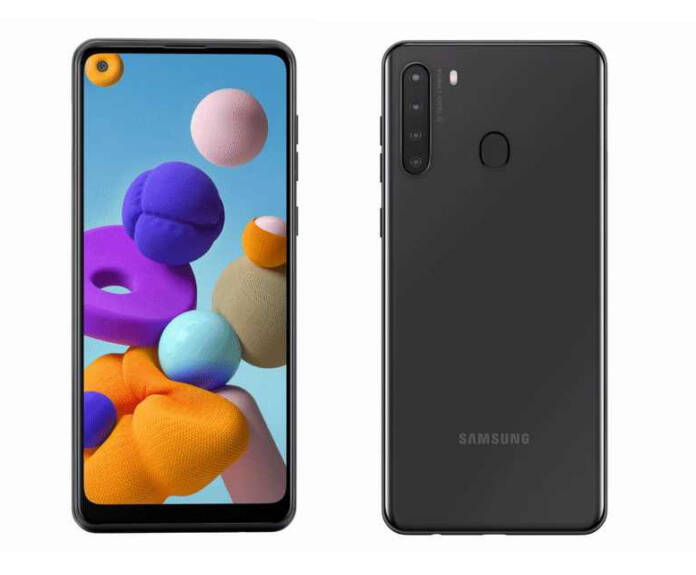 Digital render of what is potentially the Samsung Galaxy A21 has surfaced in 360-degree view – giving us a sense of how it would be when it finally drops. No date to give out yet, but the marketing renders suggest, it wouldn’t be too long before the new Galaxy phone is amid us. A delightful successor to the Galaxy A20 released last year, Galaxy A21 will be a popular entrant in the Samsung’s 2020 line-up, provided it can maintain a competitive price tag.

This marketing render of the Galaxy A21 was first posted by Evan Blass. It shows the phone with a hole-punch camera in the top left corner of a narrow bezel display having a considerably thicker chin. On the rear, the Galaxy A21 features a vertical quad-camera setup as opposed to a dual-camera setup on the Galaxy A20.

Going by the recent cameras on the Galaxy A-series phones; the Galaxy A21 could feature a primary snapper accompanied by ultra-wide, depth and macro cameras. Another facet visible on the back of the device is a fingerprint reader, which eliminates the rumors of an in-screen scanner coming to the Galaxy A21.

For other possibilities, the new Samsung phone could have a 3.5 mm audio port, 3GB RAM, and run on Android 10. Details are unavailable on what processor, and battery capacity the phone will have, but some reports advocate it will be powered by a Mediatek processor. However, a report also suggests the device will be powered by Exynos 7904 processor, feature 4000 mAh battery and 4G of RAM.

Samsung is expected to sell the Galaxy A21 in the US. We await details regarding the availability, price and a word on other key vitals of the Galaxy A21. As and when we have more information, we will update it here so you can remain updated with the latest on Samsung’s new handset.