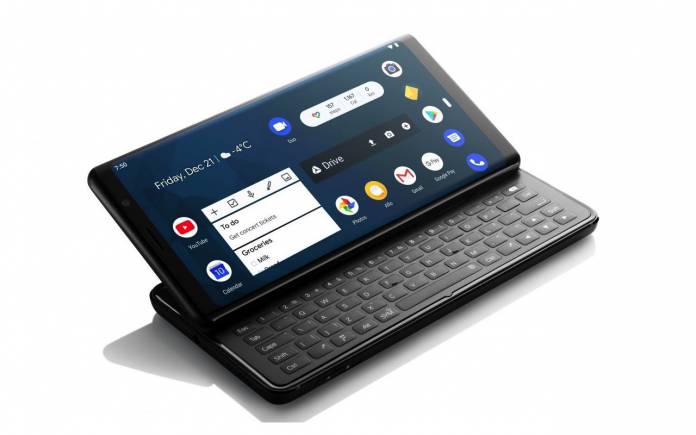 Concept phones are always welcome. We know most of them don’t turn into reality but it’s interesting to see how brands and their designers think. Oftentimes, ordinary people come up with concept images based on different sources, rumors, and speculations. For some, it’s really just their imagination. The smartphone arena is something that needs to level up further so we’re not sure how this QWERTY phone will be an improvement. If and when the F(x)tec Pro 1 goes into production and released in the market, it will remind many people of the early days of the smartphone.

Remember the HTC Dream? The QWERTY slider phone design may be used once again as a UK-based startup F(x)tec has come up with an Android phone with a sliding mechanism. The young generation may probably think this is a new design but we all know it’s not.

The QWERTY slider phone pictured above turns into a full screen. There is a 64-key five-row QWERTY keyboard that offers easier, tactile typing. While full touchscreens and on-screen keyboards are already the standard, some people still want real QWERTy keyboard on their phones. Perhaps it’s the generation that started on BlackBerry phones.

Officially called as the F(x)tec Pro 1, this smartphone runs on Android 9 Pie. It will be out in July. The main problem we see is that not many apps work best in landscape orientation which will be the main setup of the phone.

As a solution, F(x) is working on a system that displays content in two panes. It’s like having a split screen which should be easy to code. The left pane may show your email while the right one can be used for browsing. This phone is shown off at the MWC 2019. It’s not exactly the most advanced as it only runs on Snapdragon 835 but there’s still the headphone jack, microSD card slot, NFC, USB-C, stereo speakers, and a fingerprint sensor on the side.

F(x) Pro 1 is said to be available for $649/£649 in the US and UK this coming July. The phone will come unlocked so you can use it with any mobile carrier. As early as now, we can say it can rival the Livermorium.