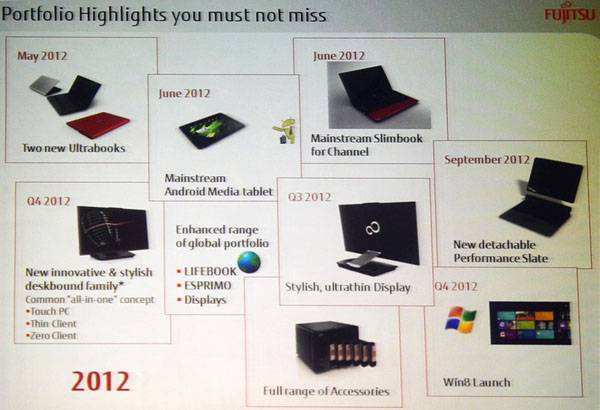 Fujitsu isn’t what we’d call a household name here in the US when it comes to Android devices, although they do make plenty of other laptops and ultrabooks. While we’ve seen Android devices from them before, and even received some hands-on time with their new ARROWS ES waterproof tablet at CES, this latest roadmap reveals two entirely new tablets coming soon — one looks to rival the Transformer Prime too.

In the image above we’ll ignore the all-in-one PC’s and Windows 8 stuff and focus on the two we are interested in. And that is those Android tablets. First up we see they are announcing a new budget friendly “Mainstream Android media tablet” coming as soon as June 2012 — hopefully with Android 4.0 Ice Cream Sandwich. That isn’t all either.

Then near the bottom right you’ll see that other tablet, the one that we are most excited to see. That is the “detachable performance slate” listed as coming September 2012. Obviously these types of roadmaps giving dates are always subject to change, but we’ll take all the information we can get. While it doesn’t specifically mention Android, Windows 8 wont be available in September and I can’t imagine them releasing it for Windows 7 with 8 merely a few months away. So we are going to assume that will be a ASUS Transformer and Lenovo S2 type hybrid tablet. Calling it a performance slate also gives us reason to believe it will be quad-core. Most likely the NVIDIA Tegra 3. It could also possibly run both Android and Windows 7 so they’ve not listed a specific OS, that is another possibility.

Fujitsu has been slowly making better and better hardware for Android and I look forward to seeing something new from them soon.