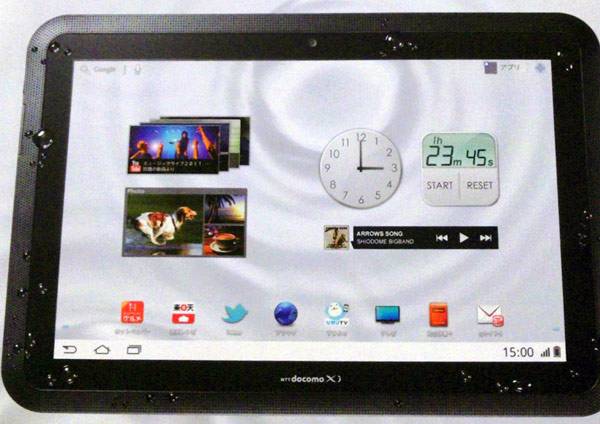 Fujitsu is prepping to launch a new Android 3.2 Honeycomb tablet that sources are calling the Fujitsu Arrow LTE Tab. If you’ve ever wondered why we have waterproof phones like the Motorola Defy and things of that sort, but no waterproof tablet then wonder no more. This will be a fully waterproof Android tablet that can handle any situation, whether it’s water, or gaming, and it has some decent hardware specs to back that up.

You can wonder in the rain or even take this tab to the lake, but I’d still be careful if I were you. The rumored device has a codename of Arrows Tab F-01D LTE tablet and should launch on the Japanese carrier NTT DoCoMo with 4G LTE. Specs are pretty decent and include a 10.1″ 1280×800 resolution display, a TI OMAP 4430 dual-core CPU at 1.0 Ghz rather than a NVIDIA Tegra 2. Comes with 1GB of ram and 16GB of internal storage and should also offer a 32GB variant.

We are also hearing it will sport front and rear cameras but specs have not yet been confirmed. The Fujitsu Arrow should also pack in with micro USB and micro SD slots (both with waterproof covers we’re assuming) as well as a 3.5mm headphone jack. Basically an all around standard Android Honeycomb tablet, yet should be completely waterproof.

Not much else has been revealed. We are still looking for pricing, possible release date, and if we can actually submerge this in water or just survive a random splash or spill. Rumors are suggesting a September launch.