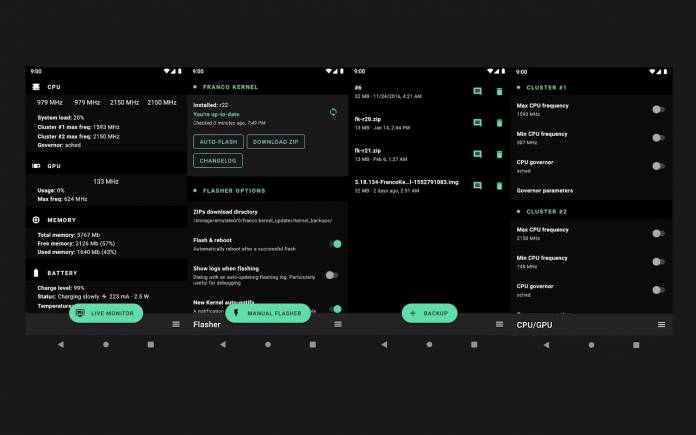 Franco Kernel may be familiar to the best hackers and devs in the world. If you’re not familiar with him, just check out the FK Kernel Manager on the Play Store. It’s ready for use for all mobile devices and Kernels. We remember it was back in 2012 when we first learned about the Galaxy Nexus Franco kernel but it has since been improved and made available for more devices.

The latest FK Kernel Manager update now brings the app to version 4.0. The custom kernel can benefit from the adjusted CPU governors, new clock speeds and voltage values, and tuning the schedulers.

Francisco Franco keeps his word to deliver the desired amount of speed and battery performance to any device. With a partner app, the kernel can help manage all settings and options below.

Some of the major improvements of the kernel is the new dark theme plus Material Design, redesigned dashboard with the info need, new Scripts Manager, full Klapse support, streamlined nav drawer, over ~100 new tunables, and several UX improvements.

The FK Kernel Manager is a premium app. You can get it for only $0.99 for a limited time.