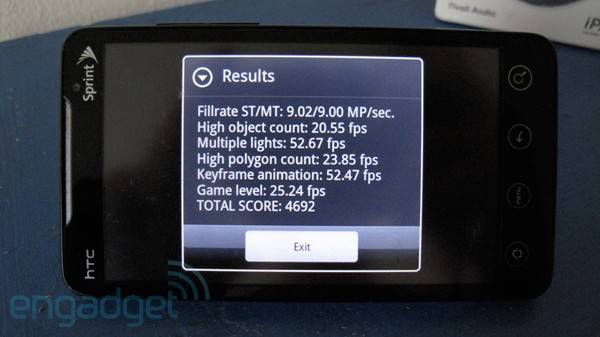 The EVO 4G update that was released earlier this week has now been confirmed to have fixed the pesky artificial framerate cap. The old cap of 30 frames per second, which HTC said could not be crossed or fixed with a software update alone, has been passed by Engadget’s own updated EVO 4G.

The old official story directly from HTC was that the cap was necessitated by the phone’s support for HDMI-out, and there’s way way the company could craft a software update to remove the limitation. Well, they have, and now we can fully enjoy our HDMI out from the device without a limitation on framerate. This is one of the secret bugs that HTC had fixed with the latest update. The others including calendar event edit issues, and adding support for multiple Gmail account syncing.

As stated before, to Update over the air:

You may need to power your phone off and back on to complete the software upgrade.