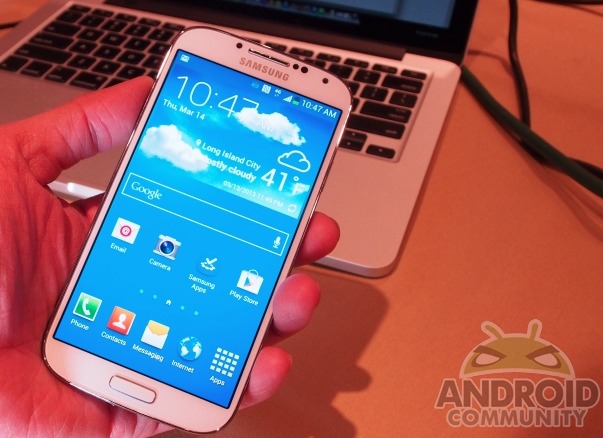 Today as I’m sure everyone knows, Samsung announced their new king of the hill flagship smartphone the GALAXY S 4. With all the rumors put to rest, information revealed, and the device in the wild we wanted to focus on four pillars of features and technology that makes up the GALAXY S 4 experience. We have an awesome 5-inch 1080p display and 8-core processor, but the software to make this device your “Life Companion” is what sets it apart.

Samsung’s calling their new GALAXY S4 a Life Companion, and they’ve focused on four key areas, or pillars, to help bring their software up to speed to offer the best and most unique experience to date. While many of these features are extreme, the innovations will make daily use a breeze, and bring us closer to those around us with another Galaxy. Here’s what they are: Enjoyment, Convenience, Creation of Relationships, then Health and Wellness.

Enjoyment
The GALAXY S 4 is all about enjoyment. Obviously with a 5-inch 1080p HD display, 13 megapixel camera, and blazing fast 8-core processor you’ll be enjoying everything the world has to offer. Capturing stunning video in 1080p, or even their new dual-shot camera mode. This captures two images at once and blends them for the perfect shot. Then Sound in Shot adds 1-9 seconds of audio to capture the moment for true enjoyment like never before. It adds drama to the image.

Then they also have Cinema Photo that takes essentially a moving image and lets you place your photo inside a quick video so you have a static image, while also showing movement. It will be like a GIF image. All these camera features combined make for a truly awesome experience with GALAXY. Story albums will be templates that you can store your photos in, and share them like a story and more. 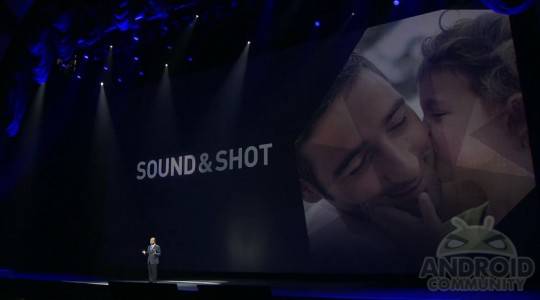 Convenience
With the GS4 Samsung’s also introduced a wide array of features to make things simple, easy, and convenient. Essentially everything here is what we mentioned in the hands-on and announcements regarding eye tracking, and motion sensors. With Smart Scroll, Smart Stay, Air View, and Hover you get everything in a quicker and easier manner.

The GS4 will recognize your eye based on tracking technology and automatically pan through images, scroll down a book or even a web page automatically based on tracking your eye. No touching the screen required. The same idea is behind Hover, where your finger works like the S-Pen stylus. In the photo gallery you won’t have to touch the screen to open a folder of photos. Simply hover your finger over the folder and you’ll get an instant preview. Same thing works for email subjects, previews in emails and much more. This brings ease of use and convenience to our lives.

Creation of Relationships
Samsung’s then added tons of features to help create and enjoy relationships with the people around us. Whether they are just friends, or other Galaxy S 4 toting smartphone users. S Translate is as you’d expect, a translation tool that will be extremely helpful. It’s a standalone app but also integrated into their ChatON messenger app and even email. Group Play returns with the GS 4 just like the GSIII and offers instant sharing with NFC. Share a photo, an album, or even an entire playlist of music with a tap. We’ve all seen that Samsung commercial, now it’s even better.

You don’t even have to share the music, you can simply use Group Play to share songs from different GALAXY S 4 devices at the same time. So your GS4-using friend can enjoy the same song as you. That’s neat. Then of course Group Play using the same WiFi connection you’ll be able to race against other Galaxy devices in Asphalt 7, Gun Bros, and many other game and apps. This list will be expanded soon so stay tuned.

Health and Wellness
The last pillar that really brings the family of GALAXY S 4 devices together is something that has really picked up the past year or so. That being the ability to track your food and calorie intake, how far you walk, heart rate, and many other features. We’ve seen this with the FuelBand and many others, and Samsung’s taking this head on. They have a new S Health app ecosystem with nutrition guides, heart monitors, temperature readings and much much more. How exactly? With the S Band accessory that will be optional.

S-Band, for starters, and a body scale and heart monitor to round out the collection. And of course all the readings from the S-Band will sync over Bluetooth to your smartphone for easy viewing, and of course sharing. We’ll have a full hands-on look at all of this sooner than later. Stick to the GALAXY S 4 portal for more! For everything else GALAXY S 4 hit the timeline below.