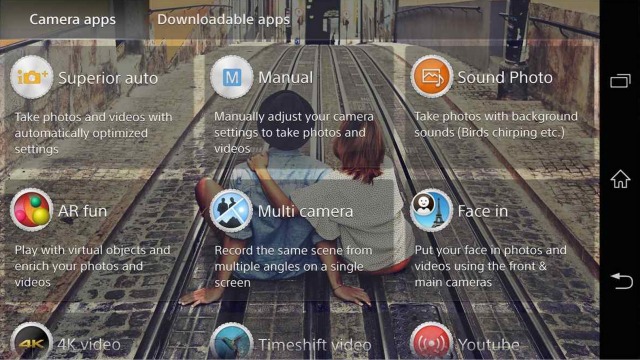 The phone camera has evolved from just being a simple, bonus accessory to an essential part of the smartphone’s unique selling proposition. And it’s not just about having higher megapixels and features, but to what else you can do with it that you can’t do with other smartphones. The newly-launched Sony Xperia Z3 wants to get ahead of everyone else with four camera apps for their “smart social camera” that aim to revolutionise how we take pictures and videos.

The Face in app will let you capture both the view that you’re taking and your reaction to it by allowing you to use both the front and back cameras at the same time. You can overlay the images as creatively as you want and “take selfies to another level” (but do we really need that?). If you’ve always wanted to have photos that can capture the actual sound, Xperia devices now have this app called, what else, Sound Photo. When you press the shutter inside the app, 10 seconds of sound and 1 second of animation are recorded. You’ll be able to view these sound photos in your Xperia album or share it on the Play Moments stream.

If you have friends who also have Xperia devices, then you’ll have fun using the Multi camera app which can let you record videos from up to three different angles at the same time and combine it into a single video. Among the four camera apps, AR fun sounds like the most, uhm, fun. It lets you add real life objects, animation, drawings, scribbles to your photos and videos while you’re taking them. And even if you move the camera while shooting, the AR stays in place.

Aside from the four apps, the Xperia Z3 also has a live on YouTube camera that lets you broadcast up to 15 minutes your live footage. So if you want to have a live broadcast of your vlog or cooking show or mini-concert, you can now do so. All of this sounds fun, but probably only if you’re an Xperia owner. We doubt if these apps will be available for other devices, so you have to get an Xperia Z3 if they sound irresistible to you.