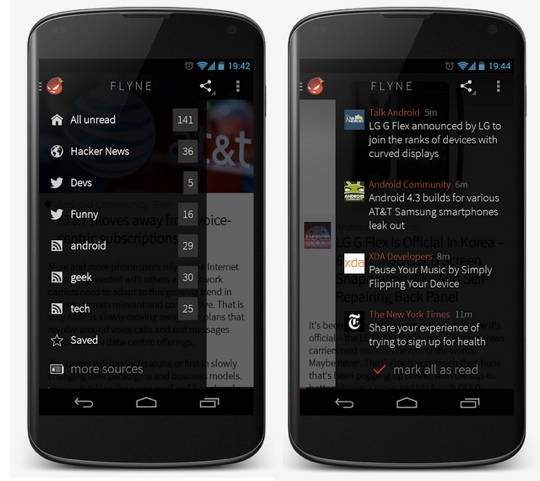 It looks like Android users have another news reader application to consider. This latest to arrive is called Flyne, The Offline Reader. The app touts itself as being a “fast, fresh and simple way to stay up to date with your favorite news sources.” Flyne takes advantage of Twitter lists and Feedly categories, but some may be happy to learn the name of the developer behind the app.

Said developer is Joaquim Verges, who is known for the Falcon Pro Twitter app. That app was removed from the Play Store due to token issues with Twitter and thanks to the release of Flyne, it looks like we now know what Verges had been working on. The app is free to download and free to use, however a $0.99 in-app purchase will offer some additional functionality.

One of the key points here is the offline capability. Flyne pulls the content down to your device, which should make it good for those who are either worried about data limits or those who are often in locations with spotty coverage. The app has you beginning with the “Popular Feeds” section, which, as the name would imply — is a curated list of popular feeds.

The in-app purchase comes in for those looking to login using their Twitter or Feedly account. Basically, the Popular Feeds access is more of a teaser to get you familiar with the app. Still, Flyne has a solid design and presents the stories in a magazine like format. Not to mention, the navigation is easy.

Along with the few options for available content, Flyne also has a light or dark (night) mode and the ability to adjust font size. Users also have the option to pick how often the app syncs, whether it does so over WiFi-only, and how big the cache is. Those looking for Flyne will be able to find it in the Google Play Store.