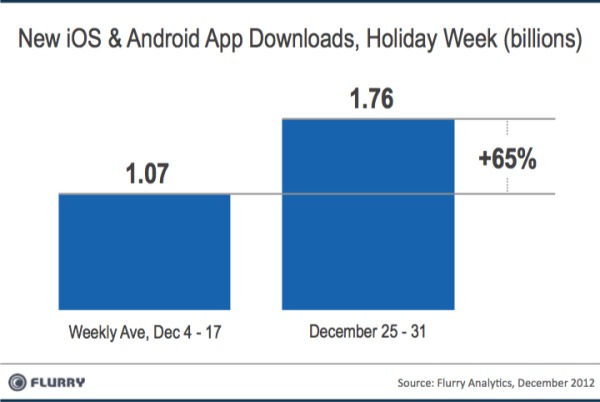 Christmas Day and the week immediately following it are obviously always going to be big for new device activations, but today we’re finding out that the final week in December might just have been the biggest on record for iOS and Android. That’s according to analytics firm Flurry, which said today that iOS and Android device activations for Christmas week topped a whopping 50 million. Looks like a bunch of people picked up a shiny new tablet of smartphone in the final week of 2012.

Flurry doesn’t offer a breakdown of how many of those 50 million activations were iOS and how many were Android, but we imagine that there were a significant number of activations for each platform. Of course, this influx of new devices also means a jump in the number of app downloads, with Flurry saying that app downloads across both platforms topped 1.76 billion in the week following Christmas day.

That certainly isn’t anything to scoff at, especially when the average for the weeks before Christmas only came in 1.07 billion. That data formed the baseline for the month of December, so the number of app downloads for the final week of the month topped that baseline by 65%. Not bad at all. 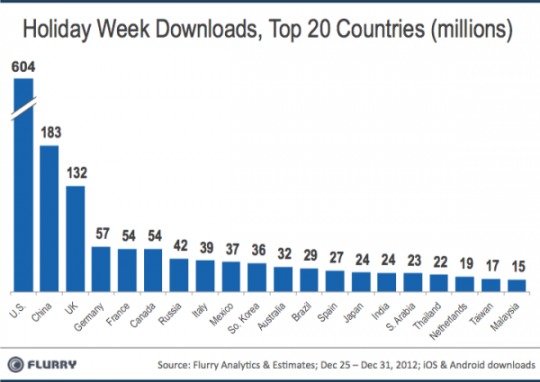 Flurry was also kind enough to break down app downloads by country. Unsurprisingly, the US topped the chart, with 604 million app downloads during the holiday week. China came in second, due to the fact that even though Christmas isn’t celebrated in that country, there are still quite a few smartphones and tablets in the hands of consumers there. Other countries that do celebrate Christmas moved up the chart in comparison to non-holiday weeks, which isn’t all that surprising to see.

Moving forward, Flurry expects that these one billion download weeks will become the norm. It also expects two billion download weeks to be commonplace in Q4 2013, so the smartphone and tablet markets will continue to grow throughout the year. Be sure to take a few minutes and check out Flurry’s full report, as it makes for an interesting read!