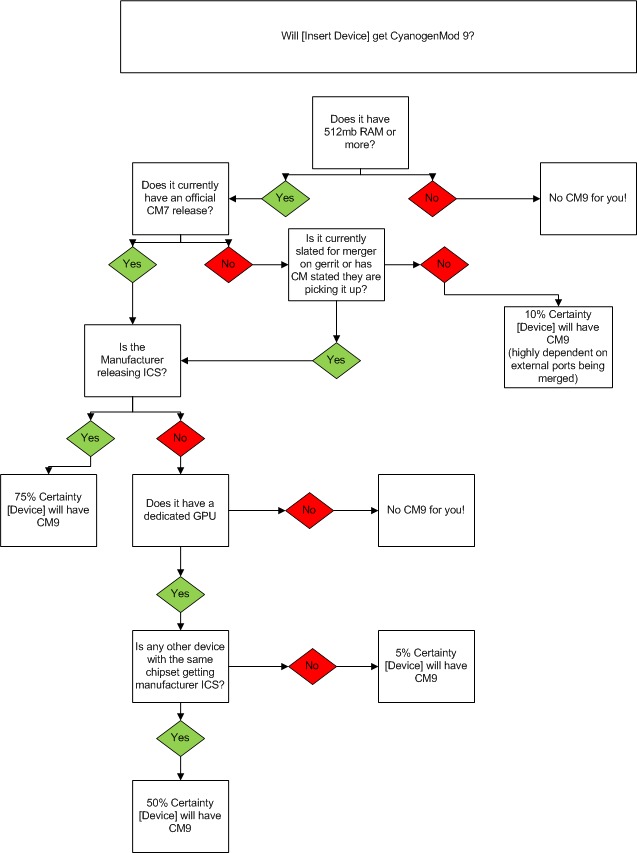 CyanogenMod supports a lot of Android phones and tablets: dozens officially, and a handful more can be found as side projects for the members of the CM team. Bit one of the questions they get asked most frequently is, will my phone/tablet/ereader/phablet/toaster oven get CyanogenMod 9, the Ice Cream Sandwich release of the popular ROM family? To help dispel some of the uncertainty, CyanogenMod released a flow chart that spells out which phones will, won’t and may or may not be officially supported. Click here for a full-sized version.

Long story short: if your Android device has 512MB of RAM or less (like the original DROID, Nexus One and pretty much everything from before summer 2010) you won’t be getting CyanogenMod 9 officially. The rest of the modifiers get a little more tricky. If the manufacturer is planning an ICS release and there’s already an official build of CyanogenMod 7 for your device, you’re quite likely to get an official CM9 build. If Your device is close enough to one of these in the hardware department, your odds are about 50/50. If there’s no manufacturer ICS update coming and the device doesn’t have a dedicated GPU, odds are slim to none.

If your phone or tablet doesn’t qualify under the CM9 team’s guidelines, don’t despair. Since CyanogenMod is published as open source code, plenty of independent modders release their own slightly different releases (often known as “kangs”) for pretty much every major device out there. Even those pesky Motorola phones with locked bootloaders can get in on the action in some cases, albeit by using some flaky kernel tricks. And there’s always other ROMs out there, or (shudder) you could just wait for a manufacturer over-the-air update.