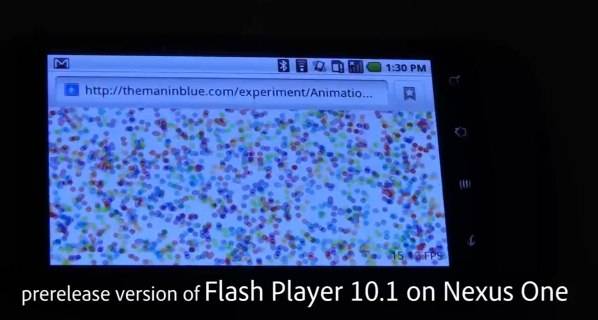 We can’t say we were that impressed by our experience of Flash 10.1 on the Google Nexus One, but it looks like fettled versions of the code are performing more successfully.  Adobe Flash evangelist Michaël Chaize has been running some comparison benchmarks between Flash 10.1 and HTML5 video on his Nexus One, and it turns out Flash is “much faster”.

“What you’ll find is that on PCs, Flash Player is faster than HTML5, and that HTML5 is not that bad for basic animations. I wanted to add more information to this benchmark, testing the Flash Player 10.1 on my MAC, and on my Google Phone (Nexus One). I obtain the same experience. Flash Player is much faster, specially with a basic shadow filter. I also tried to launch the Canvas test on my iPhone 3GS.” Michaël Chaize

Chaize’s tests build on previous work by The Man In Blue, who looked at Flash 10.1 versus HTML5 performance when viewed in desktop browsers.  They too found that the Adobe technology was faster.

Still, the end messages is that performance is very dependent on the person doing the programming.  Chaize points out that Flash developers need to be careful with their AS3 optimization, while “knowing HTML doesn’t mean that you’ll become a HTML5 expert. I guess you’ll also have to take care of code optimization.”