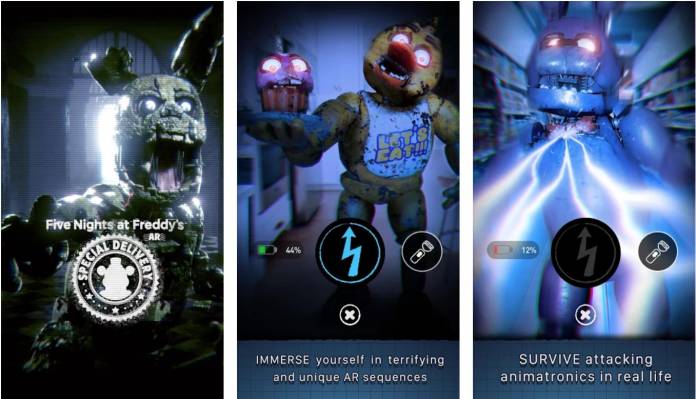 If you’re not frightened by the regular FNAF game anymore and you’d like to up the ante when it comes to jump scares, the folks at Illumix have granted your wish. Sort of. Five Nights at Freddy’s AR: Special Delivery is now available for Android devices that have augmented reality support so you can “play” with the good ole horror animatronics you’ve come to love, but this time with the added element of AR. However, it’s not as scary as it sounds like due to the nature of the gameplay.

On paper and in the trailer, it seems to be a pretty scary game because you’ll have evil animatronics jumping out at you in “real” life with your AR-powered phone. Oh, and it’s trying to kill you by the way. However, for the AR to work, you will, of course, need your area to be well lit, which removes some of the scary elements of the game. The goal is to hunt down this creepy creature by using your device’s camera and the weapons that are part of your arsenal, including zapping it with an electrical shock.

As you go around the room you’re in, trying to capture these animatronics from hell, you’ll know you’re getting warmer if your screen starts to glitch and show static. Once you capture them, you get to auto-collect some in-game items that you will need to further play the game. If you get scared easily with stuff popping out of your room, or rather your screen, even if you’re in a well-lighted environment, then this game is for you.

Within the game you’ll get basic survival tools like flashlights, batteries, the aforementioned shockers, etc, so you’ll be able to capture the animatronics or simply not get killed by them. There’s also a PvP mode where you can send these scary animatronics to your friends and if they get virtually killed, you get points and go up the leaderboard. Hopefully, your real-life friendship will not be affected by all the FNAF warfare.

Five Nights at Freddy’s AR: Special Delivery is now available on the Google Play Store. The game is free to play but with in-app purchases in case you want to spend real money to go further in the game.