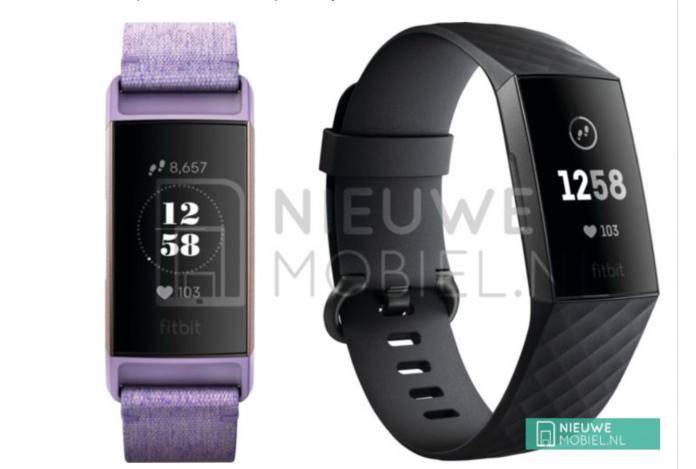 While Fitbit seems to have been focusing on their smartwatch line, with the Ionic, Blaze, and Versa, at its heart, it is a fitness tracker. The rumored next product they will be releasing is the Fitbit Charge 3, an updated version of the Charge 2 which was released two years ago at the IFA 2016 trade show. Now we get our first look at leaked images from Dutch Site Nieuwe Mobile and while we don’t yet have confirmed specs or features, we do get some clues as to what will be different about this fitness band.

What’s noticeable about these supposed images of the Charge 3 is that it doesn’t have a physical button on the side, unlike it’s predecessor. Instead we see a notch area where the button was located previously, and this might actually be a touch button. What we don’t know though is if the actual screen of the tracker will be a full-on touch screen. There is also a possibility that the tap actions from their other products, Alta and Alta HR, will arrive for this new device.

The leaked images also show more types and colors of interchangeable bands. You see a plastic one, a fabric band, and a sporty looking one that’s probably meant for those sweatier activities. These bands might seem minor but for those who place importance on personalization and matching their mobile accessories with their outfit or activity, this is important.

What we don’t know from these leaked images is whether or not the Fitbit Charge 3 will have built-in GPS. The Charge 2 didn’t have one so you still needed to connect it to your smartphone and bring that smartphone with you in order to track your location. Having a GPS receiver on the band itself will be a good upgrade so you can just leave your phone at home on your runs or rides.

IFA 2018, a trade show for consumer electronics in case you didn’t know, is just a few weeks away. So if Fitbit follows the previous Charge device’s announcement, then we can expect to hear about the Fitbit Charge 3 or whatever this new device will be called.