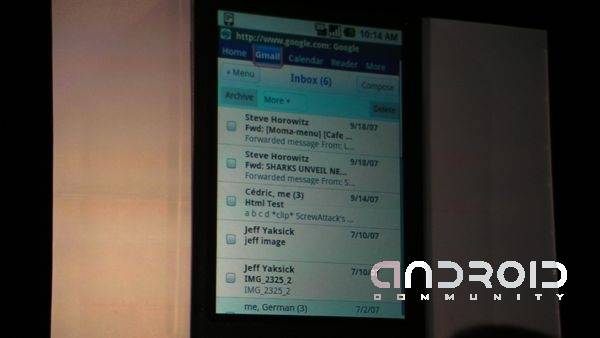 Google’s latest Android prototype is miles improved over the versions we last saw. Back at CES the GUI was clunky and the whole thing looked relatively primative; Google themselves asked us to keep an open mind and instead concentrate on the OS’ potential. Now, they’ve brought out a device that you could, frankly, mistake for production hardware.  The HTC Android Dream phone is a worthy competitor to the forthcoming iPhone 2.0!

As our exclusive demo videos show, the Android team have been putting in some long hours bringing the user interface up to the standard people expect. The iPhone sets the bar high, and leftfield rivals like Samsung’s TouchWiz GUI really pile on the pressure. What they’ve given us is, at first glance, a blend of the successful parts of each of those, together with a dose of Google’s own minimalist aesthetic. Hopefully you’ll agree with us, once you’ve looked through the photos and watched the video, that the design is a winner.

In this first video, we see an overview of the new interface and menu structure, including the clever pattern-based unlock screen. Much of the GUI can be interacted with – for instance pulling down the title bar reveals missed calls and new messages – using the familiar palatte of swipes and taps. You can also see the straightforward way to create shortcuts on the home screen; a matter of holding down your finger and then following through the contextual menus.

Next up, Google’s Street View gets the Android treatment with a built-in compass. That lets you pan around the location-based image, turning the handset into something of an augmented reality device. As you can tell by the applause, this was one of the most popular apps!

Google briefly touched on their work with developers, including the latest round of entries in their Android Developers Challenge. Here you can see a port of Pacman, developed for the handset:

In this last video, a demo of Google Maps, you can see how closely the Android experience matches that of the desktop. All of the usual mapping options are present – satellite views, traffic, etc. – and, with a 3G network, load and update quickly.

Pac-Man on Android for the firs time!

Customize how you want to unlock Android