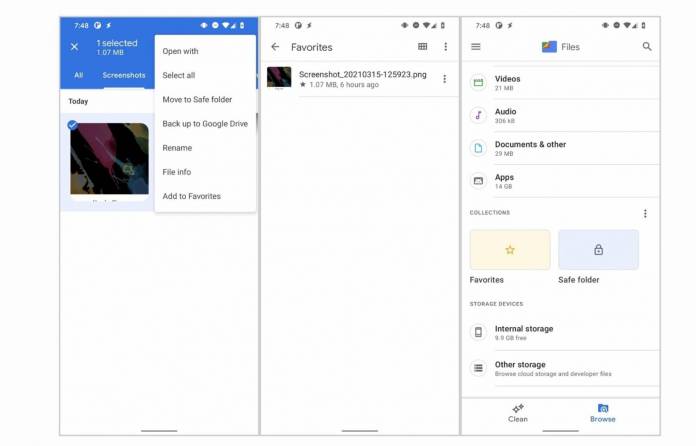 Something that was spotted back in 2020 is finally making its way to users in the latest update of Files by Google. When the app is updated to the latest version, you’ll be able to add files to a Favorites folder so you’ll have easy access to the most important ones that you need on your smartphone. There may also be some upcoming new features to make Files even more useful as you manage documents, downloads, images, videos, apps, etc.

Google has started rolling out the update to Files by Google and the main new thing users can enjoy is to have a Favorites folder to add files they want to easily access. It’s pretty easy to add one. Just go to the file and then the three-dot menu on the side and you’ll get a drop-down menu. You will see a new option there called “Add to Favorites” alongside other options like “Move to safe folder” and “Back up to Google Drive”. It will probably also show up when you select multiple files.

You’ll be able to see the Favorites folder by going to the Browse tab. You’ll see the new folder in the Collections carousel and when you open the folder, all the files you added should be there and each file is marked with a star. This way you’ll also be able to see the files you’ve “favorite-d” when you look through your files outside of the Favorites folder. There doesn’t seem to be other new features in the update but there are other things that may be coming up soon.

XDA Developers shares some of the strings that they saw in the latest update which may be some new features that will be introduced in future updates. One of these new things is that Google may be preparing a new Internal Storage UI for the app to show you which apps and files are taking up space. There may also be a new feature that would automatically detect blurry photos and suggest that you delete them to save space.

You can update the Files by Google app to the latest version to enjoy the Favorites folder. The strings on the app may not show up in the next update so we’ll just wait for when and if they eventually show up.