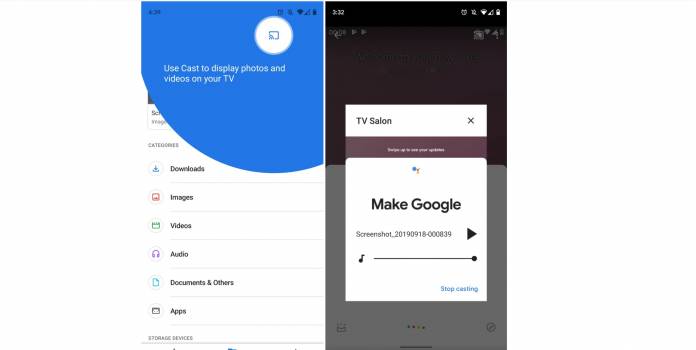 Files by Google started out as Files Go, part of Android’s slimmed-down apps for users that have limited storage and data allocation. However, it eventually evolved into an Android user’s default file organizer, storage space management, files/videos gallery, music and video player, and even file sharing app. It became known as just the Files app. The latest update to the app for its beta users is bringing Chromecast support so you can cast your files onto a bigger screen.

This ability was first spotted by the APK Insight of the 9 to 5 Google team and now it seems like it’s rolling out to selected beta users. What it basically does is let you display your files, whether it’s photos or documents on another device, preferably a bigger screen like your smart TV. As long as the other device has Chromecast support as well, then you’ll be able to cast your files onto that screen so other people can view it as well if needed.

If you’re a Google Photos user, then this isn’t something new. The photo cloud sharing app has long been able to cast your photos and videos on larger screens supported by Chromecast. In fact, Google has done a good job of bringing Chromecast support to most of its other owned apps and Files is just the latest one to have this ability. Right now it’s just rolling out to selected beta users but barring any problems, this should roll out to all users eventually.

This is just one of the newer updates that Files users have been enjoying. They recently got a much requested dark theme as well as media controls for your music and videos. The bad news with this Chromecast support is that it doesn’t seem to work for music, but that’s understandable since Google would want people to use YouTube Music or even Google Play Music (which will soon be gone) to stream their music.

If you’re one of the lucky beta users to get Chromecast support, go and start casting stuff onto your TV screen or something. We’ll let you know when the rest of the world will get this update as soon as we have official news.