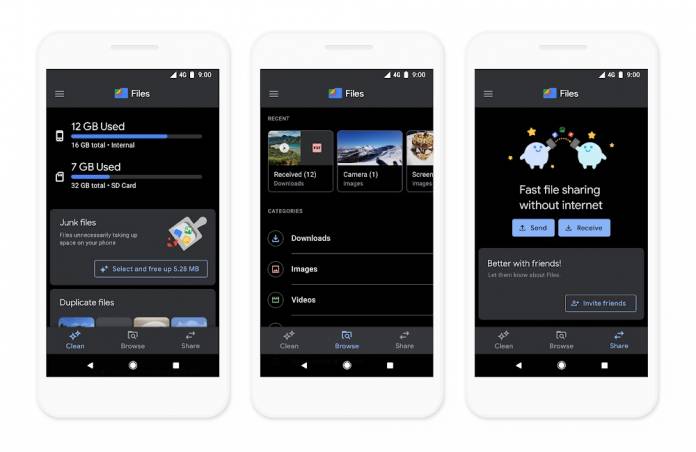 In this age where you can stream practically any form of media like music and videos, playing them locally on your device is not something that’s pretty common. But there are still those who do it and Google wants you to not download another app for you to play them if you’re already using the Files app. The latest update to the phone organizing and space freeing up brings improved local media controls and of course the ever-popular dark theme that a lot of its Google app siblings have already gotten.

Since a lot of Google and non-Google apps have been introducing dark theme options, it’s not really a surprise that the Files app would do the same. Switching to the dark theme would supposedly help lessen eye strain than the regular theme with so much white space. It also preserves your battery so it makes sense to just use this instead of the regular version. And when Android Q finally rolls out, we’ll also get a system-wide dark theme option as well.

As for the playback of local files, you now get more controls like Skip, Rewind, or Fast-Forward. You may not always watch videos or listen to music that are stored locally on your device but at least if you’re already on the Files app, you don’t need to switch to another app just to be able to listen to or watch them. It’s not a major feature to be added but at least you have that option.

Google also shared some facts about the Files app as they have reached a milestone of 100 million downloads. That means around that number of people have been using the app to free up space on their devices and manage the local files that they have stored there. While initially it was meant for countries where a lot of users have low phone storage, like India, Nigeria, and Brazil, it looks like people all over the world still found the app pretty useful for their phones. In fact, Google says the app actually frees up 8GB of space every second, so you know that a lot of people are using it.

You can update your Files by Google app to enjoy the dark theme and the improved local media player. If you haven’t tried it yet, give it a spin by downloading the app from the Google Play Store.