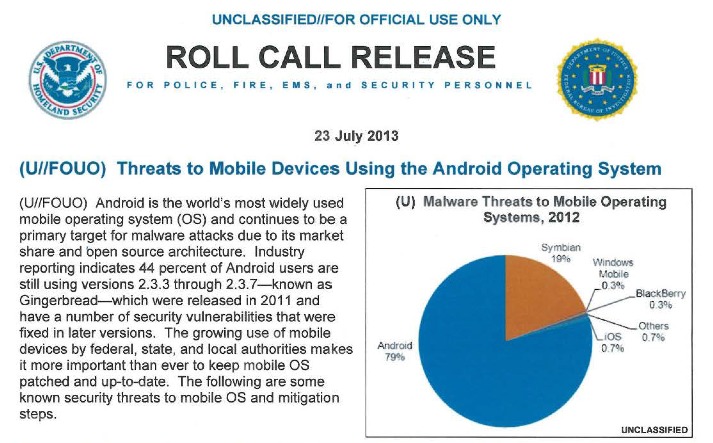 The world’s largest and most used mobile operating system is Android, as we all know, and some new documents that were recently revealed shows the US Government and feds calling out Android. Claiming it is a primary target for attacks, and they even back it up with numbers. A document was recently uncovered by Public Intelligence that is unclassified, but for “official use only” and it has all the details.

We know mobile devices are a growing target for hackers and those looking to unleash malware onto the world, and this isn’t new. The ongoing discussion about it doesn’t appear to be slowing down, and most malware reports as of late all come out and get found long after Google has solved the issue. Remember the master key exploit? This document reportedly released by the FBI and Homeland security focuses on OS versions, more than anything else.

As you can see above, the info is reportedly an unclassified document that was released last month behind closed doors, and has just been made public. It goes on to mention nearly 44% of Android devices run Gingerbread, which was released in 2011, and isn’t up to date with latest security threats. Gingerbread numbers have declined rapidly as of late, but the numbers are somewhat similar today. 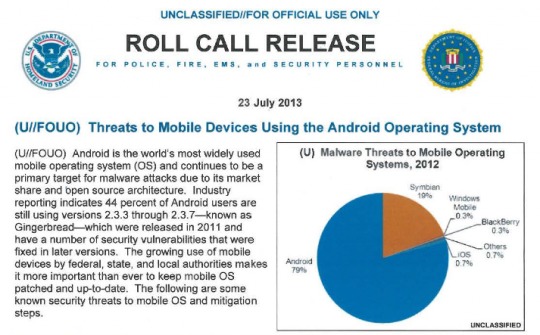 The report goes on to mention that roughly 79% of all mobile threats and attacks were aimed at Android, with 19% on Symbian and the rest barely have 1% for iOS, Windows Mobile, and others. SMS Trojan attacks represent “nearly half” of all the malicious apps hitting older versions of Android, then it goes on to rootkits and fake Google Play apps and such.

As of late most malware reports are always blown a little out of proportion, and this is no different. I think a greater threat to our devices is the NSA, but that’s just me. In the end this is basically (if legit) a document released to increase awareness for “police, fire, EMS, and security personnel” as you can clearly see at the top of the page.

Let us know what you guys think, and hit the image below for the full document.