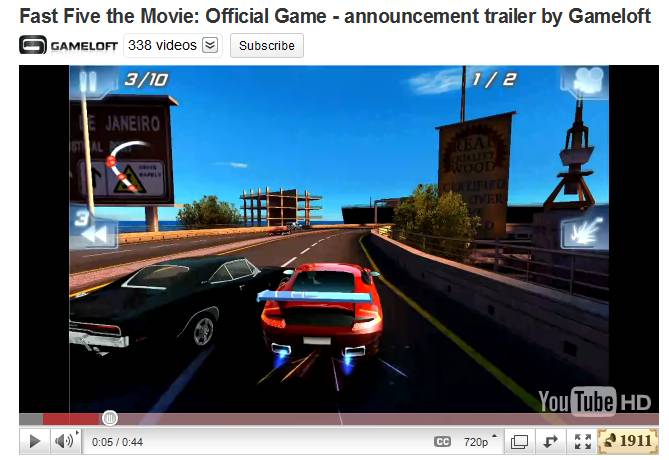 Gameloft has released a trailer for Fast Five: The Movie: The Official Game. And man, for a mobile 3D app, the graphics quality is awesome. The trailer shows a wide variety of racers and courses and some really thrilling explosions. It makes me think that the game is probably going to be more entertaining than the movie itself.

The explosive franchise built on speed is back with Fast Five and this model comes fully loaded! Play as Brian O’Conner on the wrong side of the law and assemble an elite team of top racers. Get behind the wheel of your dream car to battle opponents in the ultimate high-stakes racing game that follows the movie storyline.

The game is based on the upcoming movie starring Vin Diesel, Paul Walker, and Dwayne Johnson (fka “The Rock) and the Fast and Furious series which shows little sign of running out of gas. The movie tells the story of Dominic and his crew as they find themselves on the wrong side of the law … again … as they try to switch lanes between a ruthless drug lord and a relentless federal agent.

Just looking at the trailer, you can see how mature mobile gaming has gotten on the Android platform. The graphics are looking sharper and more colorful, and it looks like the refresh rates are getting fast and furious. And you can bet that the future of gaming on mobile platforms will only get better as the processors get more mature in the multicore direction. The game will be available for Android and other platforms starting April 28, 2001.