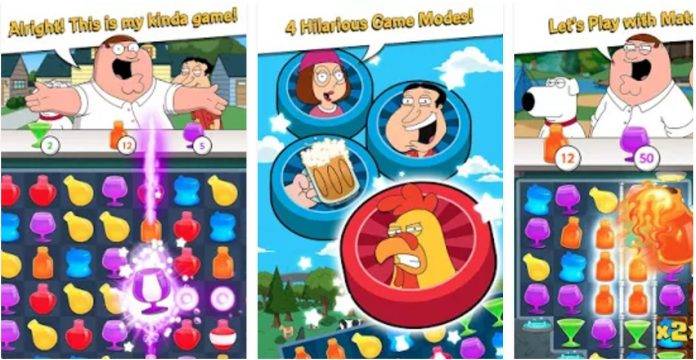 If you’re a huge fan of critically-acclaimed animated series Family Guy and you love playing match-3 games, then this new game is particularly made for you. But if you were looking for something that best represented the humor of the long-running series translated into a mobile game format, then you will probably be disappointed. Nevertheless, we have the Family Guy Freakin Mobile Game now available for free from the Google Play Store for your Android devices.

Based on the title of the game, you were probably expecting an adventure type of game where all the antics of Peter, Lois, Stewie, Brian, etc will be out in full force, mocking the world of movie and TV tie-in games which are more often than not, kind of lame. And based on the game description, you would expect your favorite characters and moments from the show’s 15 years to be an integral part of the game, making it a great extension to the TV show if you can’t get enough of it.

Alas, what you get is the very kind of game that the title mocks. It’s just a simple match-3 game where you get to match, swap and play around 160 levels. There are also four different modes in case you get bored with match-3 but they’re mostly mini-games. You get the usual boosters, collectibles, quests, but just enhanced with Family Guy characters.

If you still think this is your jam, you can download Family Guy Freakin Mobile Game for free from the Google Play Store. Of course there are in-app purchases available but unless you’re a super duper fan wiling to spend money, you can opt not to.