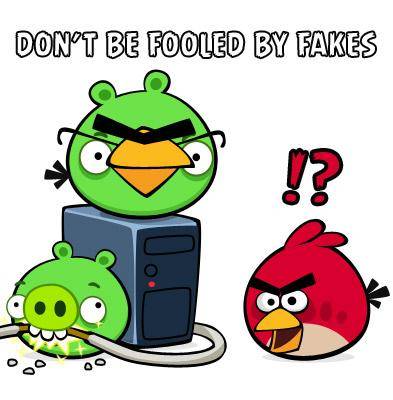 Angry Birds Space is a lot of fun. No, really, it justifies the hype – if you haven’t tried it yet, download the free game in the Google Play Store. But for Pete’s sake, make sure you’re using the Google Play Store: a fake app is unsurprisingly masquerading as the ultra-popular mobile game to add Android phones and tablets to its network of infected devices, remotely downloading more malicious apps and displaying ads. Security researchers at Sophos spotted the fake app in third-party app stores, but says that the official Rovio files are not affected.

Rovio mentioned the fakes on their own blog, along with the charming illustration above. Interestingly, the infected app actually contains the full version of the Angry Birds Space game. This bit of half-truth in advertising is likely to help get the fake app disseminated quickly. The extra code is hidden in a JPEG file, and can remotely download more apps and display its own ads across the phone. Due to the distributed nature of this latest infection, there’s no way to know how many phones and tablets are currently running the doppelganger app.

A more interesting question is why people are downloading the fake app in the first place. Angry Birds Space is free, after all, unless you go with the ad-free or tablet versions. And presumably legitimate copies are available from reliable third parties – heck, even the Nook Color and Nook Tablet have the game. There’s no reason that anyone, even those who can’t access the Google Play Store because of hardware or geographical location, should be bamboozled. Remember to stay vigilant, and that piracy is for suckers.