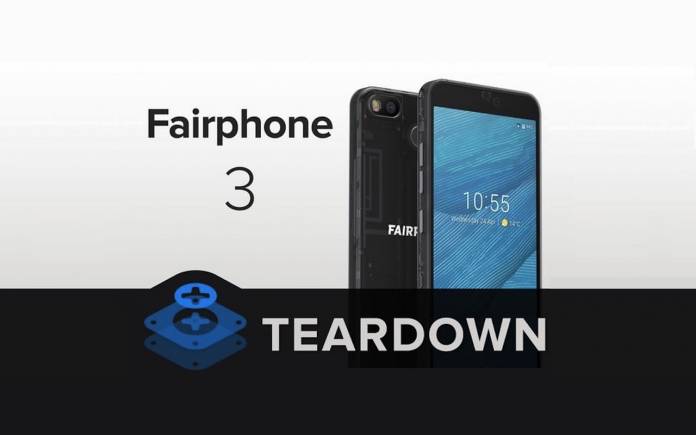 Fairphone has got a fair share of coverage here. It announced the Fairphone 3 last month as another sustainable modular phone. We’re interested as to how the phone components were laid out inside. The device that was earlier sighted on Bluetooth SIG turned out to be real after a long break from the company. The best way to see what’s inside is a teardown and thanks to geeks from IFixit for doing one right away. We trust IFixit for doing systematic teardowns because they give us a slow but a clear glimpse of what’s inside.

To review, the Fairpone 3 comes equipped with a 5.65-inch Full HD screen with 18:9 aspect ratio, Corning Gorilla Glass 5, display Dual nano-SIM slots, standard WiFi, Bluetooth 4.2, NFC, GGPS, Qualcomm Snapdragon 632 chipset, 4GB of RAM, 64GB onboard storage, and a 3060mAh battery. In the camera department, there is a 12MP primary camera and an 8MP selfie shooter. The memory is expandable via a microSD card slot because the 64GB may not be enough. The phone is powered by Android 9 Pie.

According to Fairphone, there are seven (7) models you can take out and repair easily. Now let’s see how they are layered inside.

The Fairphone 3 is bigger compared to the original Fairphone and Fairphone 2. Removing the back panel is very easy–no need to use a special tool. It comes with an additional bumper for protection.

Removing the batter is easy. Simply lift it when you see a notch at the bottom. You will see some r standard Phillips #00 screws that can be removed–again very easily. A tiny screwdriver is provided out of the box. Once the screws are gone, the display unsnaps easily from the frame.

Everything is easy to remove. Of course, because the phone is modular. You will see the modules and connectors are labeled so you won’t have any problem which is which.

Check the bottom module, top module, and camera module. The loudspeaker even have its own module. When you take out the motherboard, you will see spring contacts that connect to a few antennas, volume/power buttons, and fingerprint sensor.

So what’s the Repairability Score? 10! That’s very high for a mid-range phone. Components inside are modules so tey can be removed and replaced easily.