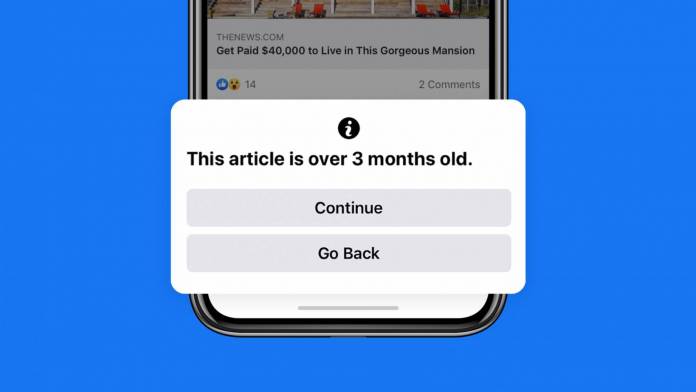 You’ve probably seen one or two (or more) of your Facebook friends share a post about a breaking news celebrity death but when you click on it, it’s a post from 5 years ago. While technically not fake news, some of the stuff people share are old news and sometimes it can contribute to misinformation. Now Facebook is rolling out a feature that will give you a notification when you’re about to share something that is more than 90 days old.

Back in 2018, Facebook already introduced the context button so you can find more information about the sources of articles in your News Feed. Now they’re adding more context by giving you a notification to tell you that what you’re about to share is something that is over 90 days or 3 months old. A survey that Facebook did said people want to see information that is timely but there are still some who make the mistake of sharing posts that are anything but.

When you click the share button on an article that is more than 90 days old, a notification will pop up. You will be given the option to Continue or to Go Back. If you understand that what you’re sharing is timely and you need to share it for one reason or another, then tap Continue of course. But if you realized that you’re making a mistake sharing it, then at least you have the opportunity of going back instead of having someone comment “old post” on your post.

News publishers themselves have expressed concern that the sharing of their older articles might “misconstrue the state of current events.” Some have already prominently labeled their older articles to avoid confusion. So this notification from Facebook should also help educate people about the stuff they share. Unfortunately, if you’re determined to share that news for nefarious purposes, a notification will not stop you.

Facebook says they will be testing out some other notification screens over the next few months to provide its users with more contexts. It may not be enough though to staunch a lot of criticism being lobbed at the social media giant over its seeming inaction in stemming hate speech and fake news.