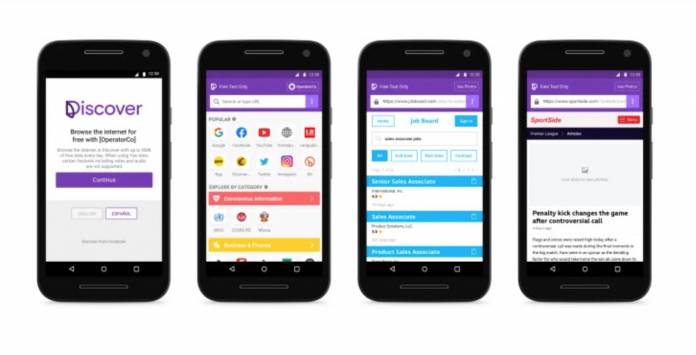 This COVID-19 pandemic has once again thrown a light on how important it is for people to have access to the Internet, which can sometimes mean life or death. It also highlighted that not everyone has decent access to it and that has spelled the difference in terms of work and catching up with school. Facebook has made it their “mission” to connect the world and now they are testing out something called Discover that would let people access the Internet for free but with limits of course.

Previously, Facebook launched something back in 2016 called Free Basics where users could access selected websites for free. But it became a bit controversial, even being banned in India, because it threatened net neutrality since they were giving an advantage to some websites, including their own over others. They did eventually open the platform to other developers so more websites can be added but there are still reservations about it.

Basically the Discover app (which can also be accessed on mobile web) gives people low-bandwidth browsing so they can view any text on a website using free daily data. They will not be able to access video, audio, and other data-intensive traffic but supposedly, all websites will be treated equally. Users will get a balance of free data from their participating mobile operators. If they would like to view the other content, they would have to use or buy their data.

Websites are encrypted when possible, even if the site being viewed is only on HTTP and not yet on HTTPS. Facebook says your browsing history will not be stored on Discover and will not be used to target ads for you or to suggest new friends on your Facebook app. In fact, you don’t even need a Facebook account to be able to use the app and it has its own standalone privacy policy.

For now, they’re testing out Discovery in Peru but they will also be launching it in other countries, specially Thailand, the Philippines, and Iraq. We’ll find out more details as they go to a wider rollout soon, but we’ll probably see it more in countries with poor Internet connection.