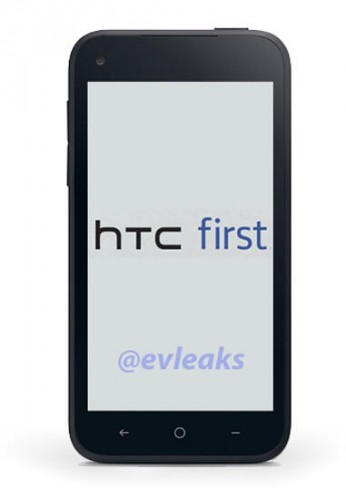 After all the reports and rumors it looks like this will in some manor truly be a “Facebook Phone” as many have been calling it. Thursday Facebook will be announcing their new home on Android, and now today we have our first look at what is likely to be announced. It’s being called the ‘HTC first’ with snazzy looking Android navigation buttons and all.

We’ve seen countless reports of a Facebook Phone, and HTC’s no stranger to the idea either. Their previous attempts failed quite hard, but this time around they are a bit more hopeful. So much in fact it looks like they could be calling it the HTC first. That’s what we’re hearing and seeing at least.

Previous reports showed the ‘Facebook Phone’ being called the HTC Myst, and it’s already been spotted at the FCC clearing with AT&T 4G LTE radios. The specs are pretty mid-range, and so is the design. So check it out. The above image is our first leaked press image (from a reliable source) of the Facebook phone. Then below are the specs that have been confirmed from previous leaks and the FCC filing. It looks like the HTC Myst will be called the HTC first, and is real as can be.

While this won’t be a completely different version of Android. Reports suggest Facebook has designed a home screen replacement launcher that will take over the general look and feel of the device, and HTC is their first partner as we see here. We’re also hearing Samsung will play a role at some point.

For now this is all we have, but stay tuned. We’ll be live at the Facebook event Thursday for all the details, information, pictures, and hopefully hands-on time with this new smartphone so stick around. If this phone comes free with a new 2-year contract to AT&T can it be successful? We think it has a chance!