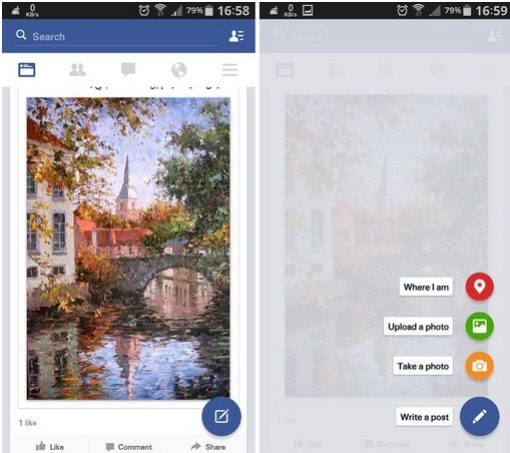 It seems like Facebook is also giving in to Google’s “gentle suggestion” of using the Material Design visual guidelines, at least based on some posted screenshots. Android users might be able to enjoy floating action buttons that look like the ones that have been seen on devices that already have already received the Lollipop update. There is no official announcement yet, but it looks like tests are underway, and it is something users can look forward to.

The screenshots show that when you touch the floating action button, it will show you the different things you can do on your Facebook status, like check in to your current location, upload a photo, take a photo directly from your camera to upload, or just a simple write a post button. We do hope they’ll add the “what are you doing” option because we want to have an easier way of telling other people what we’re feeling, watching, reading, eating, etc.

We’ve already seen this kind of design from other apps like Evernote, Inbox, and other Google apps. It has made life easier for people who do a lot of things on their smartphone or tablet while on the go. It eliminates a few seconds and steps, which might not be a lot when measuring it for one action, but put together, it gives us a few minutes more to do other things digitally (and IRL too).

Facebook hasn’t announced yet if this will actually be happening, but if things work properly and bugs will not interfere, we can expect this redesign in the next few days or weeks. Let’s just hope this will be a good step forward for Facebook and not end up being another change that users will complain about.