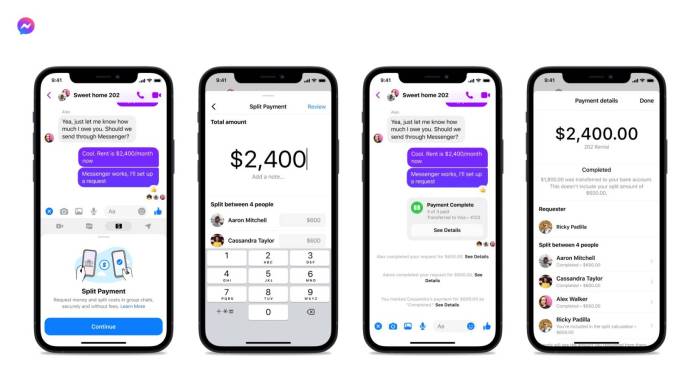 One of the most complicated things about going out for dinner with friends is the splitting of the bill at the end and reminding people to pay up. For moments like this and other times when you need to divide various payments like house bills and gifts, Meta may have a solution soon for you. They are starting to roll out a new feature called Split Payments that will let you easily divide expenses among your friends, as long as they are using the Messenger app as well.

From the name itself, it’s easy to understand how Split Payments will work. Meta describes it as a “free and fast way” to divide the cost of bills and expenses amongst you and family members or friends. Tap the “Get Started” button in a group chat or go to the Payments Hub in Messenger. You’ll be able to split the bill evenly amongst all the members or modify the amount for each person. You can choose to include or exclude yourself in the computation.

You can add a personalized message so everyone will know what the “bill” is for. You’ll have to confirm your Facebook Pay details as well before sending the request to your group chat thread. This holiday season will be the perfect time to launch and try it out although they are making it available in the U.S only in the next few weeks. Theres’ no indication if will be available more widely and in other countries eventually.

Messenger is also adding four new augmented reality Group Effects so you can play around with them during your group video calls. They are created in partnership with four content creators and are connected to their internet personalities of course. King Bach lets you choose between two “royal effects” while Emma Chamberlain brings a dual lo-fi camcorder effect. Bella Poarch brings her social alter egos while Zach King brings the illusion of buffering.

Messenger has also recently added new chat themes and soundmojis for various fandoms. While Stranger Things launches in 2022, you can start hyping with two new soundmojis and a new chat theme game with the Upside Down. There’s also a new Taylor Swift soundmoji to celebrate the re-release of her Red album (Taylor’s version).