Facebook has recently rolled out the latest update for the Messenger app. And with this update, they have gone from offering text and image messaging to text, image or voice based messaging. This latest Facebook Messenger app update is currently available in the Google Play Store where it is sitting as version 2.2.4.

The new voice messaging ability can be found within the app by tapping to write a message. Once there you will see the four options which include Choose Photo, Take Photo, Image Search or Record Voice. The last is (obviously) the option you will want to tap if you are looking to record voice. From this point, you will be given the button to begin your recording.

The button must be held while recording and users will be able to record messages up to one minute in length. Assuming your voice message is good and what you wanted to say, just release the button to send the message. Otherwise, if for some reason you needed to re-record, just slide your finger off the button to take your do-over. In addition to this update bringing the voice messages, the what’s new section in the Play Store listing also notes “other improvements and bug fixes.” 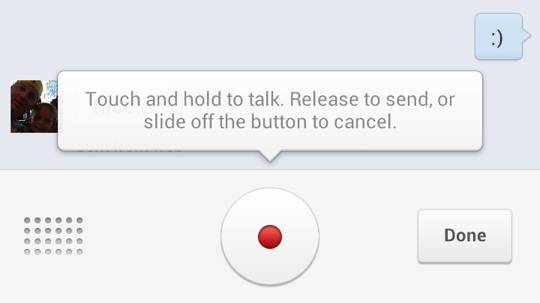 Otherwise, while the voice messages have been added for all users, it looks like Facebook is also testing a VoIP based calling solution. This testing is currently available only for those in Canada and takes the voice messaging a step further — into two-way calling. And on top of this being available only for those in Canada, it is also limited to iOS. That being said, assuming the testing goes well, Facebook is expected to roll it out for Android and also for a wider audience.