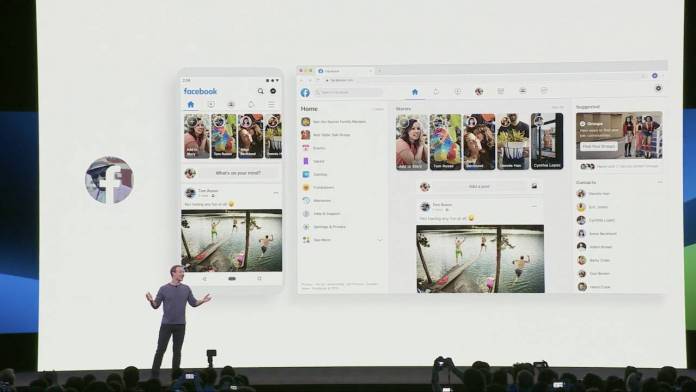 Facebook has made some pretty major announcements at the opening of their F8 2019 developer conference as they continue to try and evolve the business and at the same time try to stop the continuous exodus of people unhappy with the platform. For those who are still in it for one reason or another, you’re getting a new, updated mobile app whether you want to or not. Messenger will also be getting new stuff, with a native desktop app coming soon as well as the long-rumored integration of the company’s three messaging apps, Messenger, WhatsApp, and Instagram messages.

But first, let’s focus on the one that’s already here. The rollout of the new Facebook mobile app, internally known as FB5, has already started. Instead of the blue color scheme that we’ve known from the beginning, you’ll now see a whiter theme with grey frames and more minimalistic graphics. You’ll also see a new circular icon instead of the “squircle”. These are just some of the physical changes that you’ll see.

But the “deeper” change is that the app’s new version will be pushing Facebook Groups to the forefront. It will be easier for users to access their groups, to join new ones, and even to create their own, various micro communities. And because we all know that we can’t have nice things, there will also be easy access to reporting tools for groups in case you come across those that espouse things like hate speech, violence, bullying, harassment, spam, adult content, unauthorized sales. And you know there will always be a lot of them.

As for Messenger, we will be getting a desktop app both for Windows and Mac so we won’t have to rely on using it on our browsers or on third-party desktop wrappers. The native app will supposedly support all the existing features of the messaging app including group video calls, multi-tasking, project collaboration, etc. This is still in the testing stage but will roll out later this year.

Plans to have Facebook Messenger, WhatsApp, and Instagram Messages are still pushing through, despite early objections to it. They will have to create a common architecture for all three apps so this might take a bit of time to roll out. As for the mobile Messenger app, they are also rebuilding it from the ground up to make it lighter and faster. These things will roll out later this year but the new Facebook app has already started in the US and selected markets.