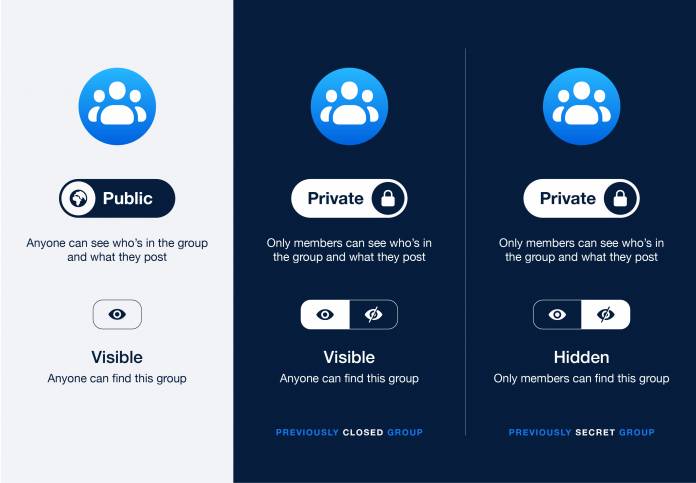 As more people shift to Facebook Groups for more personal discussions and interactions rather than the more public personal profiles or pages, the social media giant has been constantly improving its features. Now they are also simplifying the privacy and search settings of Groups so it won’t be as complicated anymore both for the members and the administrators. Now you only have to remember two settings: Public and Private. Facebook says this is to “better match people’s expectations and help provide more clarity”.

The new group privacy settings is now just divided into two. Public groups are visible to everyone, both in terms of group members and group posts. Private groups will now be visible only to members, both the list of members as well as the posts within the group. As for group admins whose concerns are searchability and discoverability, the settings for privacy and discoverability are now separate. They will now be able to choose whether the group can be found in search or in other places.

All groups that had “secret” settings will be automatically set to “private” and will be “hidden” in search. Groups that were marked as “closed” will now be changed to “private” but will be “visible” in search. And of course, groups that are “public” will still be “public” and “visible”. All of these controls and options can be found in Group Settings but the previous restrictions on if and when they can change the settings. Members will still be aware when the settings have been modified.

Protecting group members should also be a priority of Facebook and they are working on the Safe Communities Initiative. They are using AI, machine learning, and still some human intervention to remove posts and groups that are violating their policies. “Trained reviewers” are still needed because some things need to be understood in context. But they are using this to also train the technology to get better in detecting things like this.

If you want to learn more about all these changes as well as the various resources for members and admins, there are links in the source so you can check them out to make sure that you understand what you’re getting into with groups and also the limitations you need to follow to avoid being penalized.