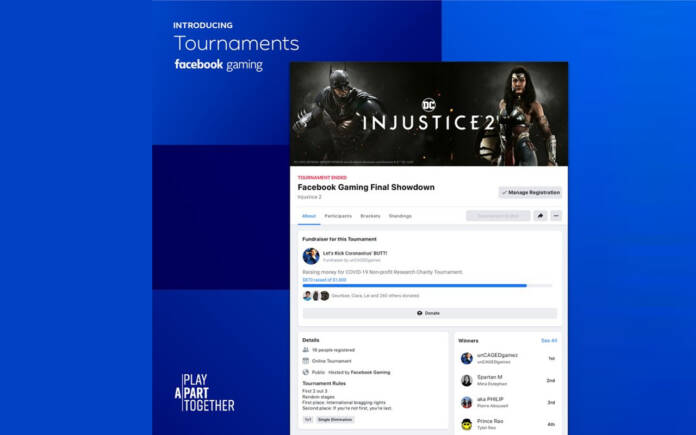 In these tough times, while WhatsApp has limited forwarding of messages to curb spread of fake information; Facebook has rolled out gaming tournaments. A new feature in its gaming platform, which will let people stay connected through games as social distancing keeps them apart. Early access is open to everyone – you can create or join a virtual gaming competition and have family and friends play or follow along.

The new feature was introduced by Facebook Gaming via a series of Tweets. Anyone can start a new tournament, which can be anything from a dual between friends, a competition between colleagues (after a long day of working from home) or of course, an esports tournament with people from across the globe joining in. To find ongoing tournaments or to setup up your own, you log in here and get started.

You can connect using an Android Facebook app or the web browser to create single or several tournaments tied to one event. Fill out the particulars regarding date, location, game, tournament type (single, double elimination or round robin league) and begin inviting participants to join in. The tools provided have everything you’ll need from seeding to bracket management and score entry.

While this may come as a new feature to us, according to Mina Abouseif, an engineer behind tournaments, it had been in works for a while as a way to help Facebook set up an esports platform. Social Media giant has fast-tracked the service and offered it as early access to promote friendly competitions through social distancing gaming tournaments.

The platform is not fully complete yet, Facebook is inviting gamers/developers to start playing and help build it along. Though, it not being left alone as a gaming story altogether. It is seen as a way for participants, developers, and communities to connect easily. Creators when hosting tournaments while streaming live can also raise funds for critical causes with tools built into gaming videos.