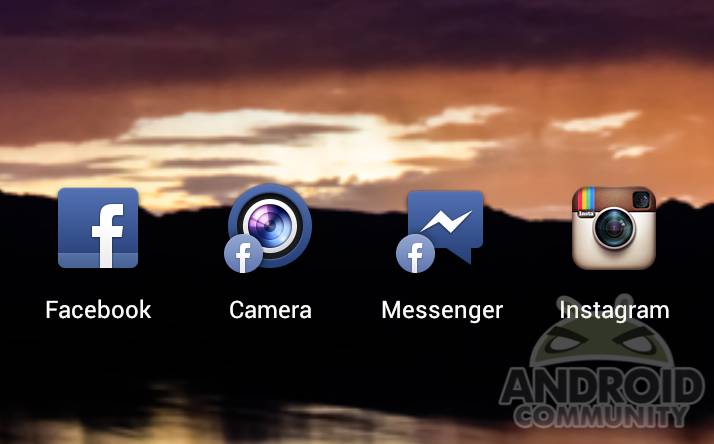 Facebook for Android has seen a few updates this week in case you’ve missed them. While I wouldn’t go as far as to call them progress — they are making changes. Some for the better, and some for the worse. As if Facebook didn’t consume too much of peoples lives already, now they’ve updated the app and added two more icons to our app tray. Instead of one Facebook icon on our phones, we now have three, or four. Seems excessive to me and I’m not a fan.

The update is great and all and brought some cool new features for the heavy Facebook user. They’ve introduced a dedicated camera app shortcut so you can instantly snap a photo with your Android smartphone, then upload it directly to Facebook all in-app. The thing I don’t like is they’ve made this one more icon to add to my already 7 pages of apps on my Galaxy Nexus. I have enough Facebook, I don’t need more. What’s next? Are they going to add the same little “f” to Instagram too? 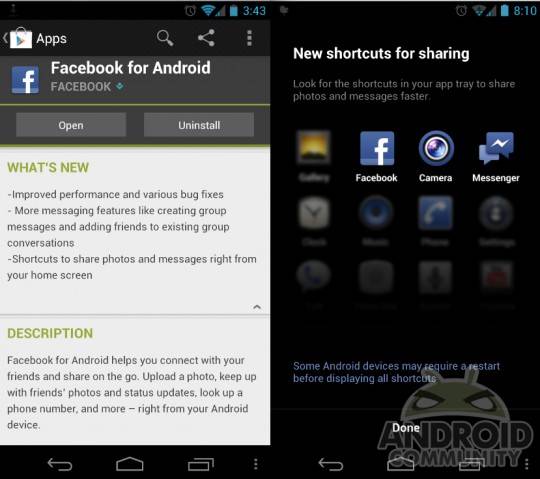 As you can see from the “what’s new” above, Facebook has increased performance and fixed a few bugs. They’ve also added shortcuts like mentioned above for the camera and messenger. At first they looked too similar to stock app icons and many users were complaining. Now they’ve updated them with the little “f” symbol to keep them apart. Users in the Play Store still seem to be complaining about having 3 new icons though. I had Facebook Messenger already installed so after this update I had 4 icons for Facebook alone, that is four too many if you ask me.

These new features are nice additions and welcomed changes, but make them widgets please, instead of crowding up my app tray with more icons. The app did see some serious performance increases and it’s been quite speedy for me, but could still use some work. Get the update right now and let us know what you think.