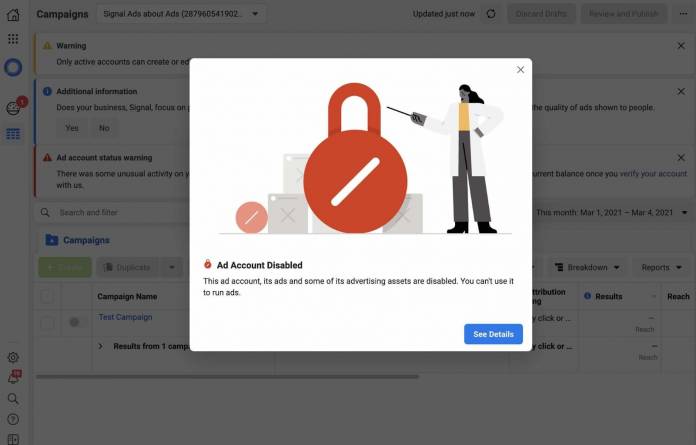 You have to give it to Signal for daring to run an ad on Instagram that “exposes” the ad-targeting practices of the latter’s parent company Facebook. However, the social media giant is wise to their ways and has now not only banned the actual ads but they have also disabled Signal’s ad account altogether. The privacy-focused messaging app probably intended to use Facebook’s own tools against itself to prove a point. Now, they’ll have to do it on another platform that’s not on Facebook’s dime.

Signal’s Instagram ads were pretty “simple”. It was just a text ad with blue background that said things like “You got this ad because you’re a K-pop-loving chemical engineer. This ad used your location to see you’re in Berlin. And you have a new baby. And just moved. And you’re really feeling those pregnancy exercises lately.” There were several versions of this that showed how granular ad-targeting could be.

Of course, it wasn’t an actual mind-reading ad unless one of those specifically applies to you for some reason. Signal says they pulled some of this information from the data that Facebook’s advertising platform collects. But obviously, Facebook “was not into that idea” as per Jun Harada, Signal’s Head of Growth and Communication. Sure enough, Facebook took down the multi-variant targeted ads and their ad account has also been disabled.

What they “revealed” here is not a secret anymore as by now we know how deep (and devious) the information that Facebook gets from us. We may be using their products like Instagram, WhatsApp and the main Facebook app for free, but in exchange, we are giving them information that they can then use to attract advertisers to the network. As they say, we, the consumers, are the product.

We don’t know if Facebook will eventually restore Signal’s ad account on Instagram. But if you want to take a look at the ads that were removed, you can check out the blog post from Signal.