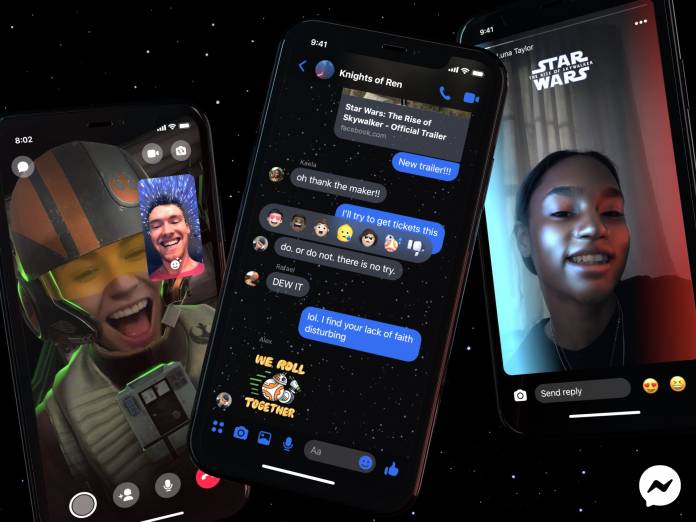 We’re a week away from the much-hyped 9th film in the Star Wars trilogy of trilogies and so all marketing efforts are reaching fever pitch over the next few days. If you are a fan of this film franchise and you use the Facebook Messenger app a lot, you’ll be happy to know that they’re once again partnering with Disney to bring you Star Wars-themed features. You get chat themes, reactions, stickers, and augmented reality effects to make your conversations more interesting.

Star Wars: The Rise of the Skywalker brings back your favorite characters from the previous films and also heralds the end of this particular storyline that started back in 1977. And just like previous films, the tie-ups with different brands are always eagerly awaited by fans. Now on Messenger, you will be able to share stickers and reactions from both sides of the force, so whether you’re more Jedi or more Sith or somewhere in between, there is an appropriate one for you to share.

There are also limited-edition AR effects that you can play around with when making video calls on the Messenger app or when taking a photo or video using the Messenger camera. The Lightspeed Effect lets you jump into hyperspace as you open your mouth and see where it takes you. If you want to fly Poe Dameron’s X-Wing, you can use the Cockpit Effect as you fight for the Resistance. The Dark vs Light Effect lets you choose which looks better on you, the dark side or the light side of the force.

These features won’t really do anything for your productivity but are still fun to use especially if you’re very much a Star Wars fan. We’ll wait and see if they will be adding more features and we’re hoping for a simple game to make it even more interesting. May the force be with you!