While you can actually see 360 degree photos and videos on your smartphone or tablet or even on your desktop, nothing beats viewing it using a virtual reality headset. And since a lot of people are apparently uploading this kind of media on Facebook, it was only a matter of time until they finally have a dedicated app for it. Sure enough, the Facebook 360 app is now available for the Samsung Gear VR so you can view the photos and videos in all their 360 degree glory.

For more immersive viewing, it is best to experience the 360 photos and videos on the dedicated app while you’re wearing your Gear VR of course. And in case you’re worried that you will eventually run out of media to look at, there are now 25 million 360 photos and 1 million 360 videos that have already been uploaded on Facebook. So even if your friends are not yet into the 360 thing, then you know you probably will have enough to tide you over until they finally get on the bandwagon.

There are four feeds on the app: Explore, Following, Saved, and Timeline. Explore of course lets you discover the most interesting 360 media that are on Facebook. If you have friends that are uploading 360 stuff on the social network, you’ll find them on the Following feed. And if you were on your mobile and saved a 360 video for viewing later on your Gear VR, you will be able to see them in the Saved feed. And if you yourself upload 360 photos and videos, then you will see it on your Timeline. 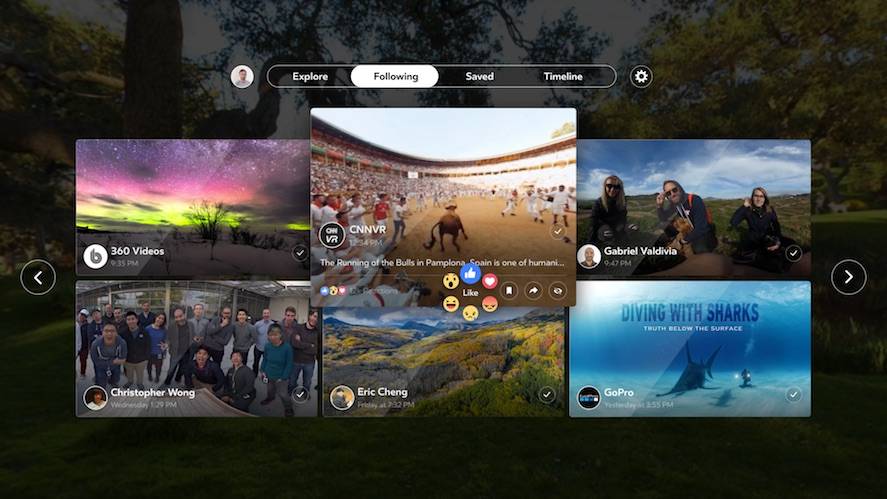 You can download the Facebook 360 app on the Oculus app on your compatible Samsung device or go directly to the Oculus site. Seeing how this whole VR and 360 degree multi-media industry continuously evolves will be interesting.