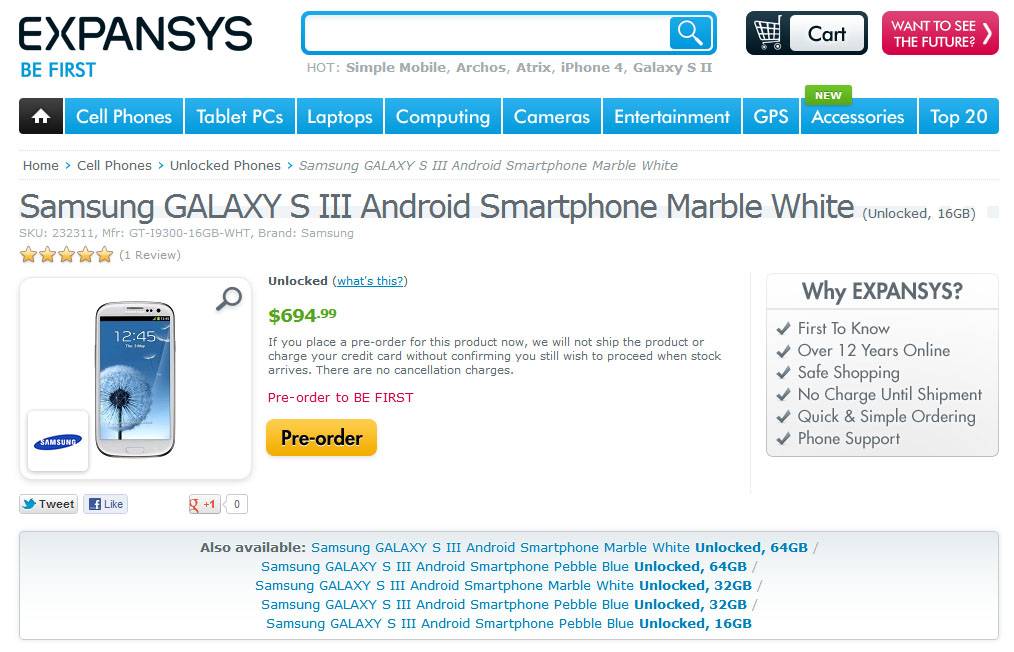 Dying to get your hands of Samsung’s latest flagship, but can’t wait around for AT&T and T-Mobile to get around to releasing it sometime this summer? Than import specialty shop Expansys is your new best friend. They’ve put the Galaxy S III up for pre-order on their website for a pretty astounding $694.99, plus shipping. They don’t have a date on the listing, but it’s pretty safe to assume that they plan to grab as many as they can when the Galaxy S III launches in Europe on May 29th.

Import shops like Expansys and Dynamism are a good way to get gadgets that aren’t available in the US, but in this case we’d recommend caution (not to mention patience). We know for a fact that the Galaxy S III is coming to multiple US carriers, almost certainly including AT&T and Verizon at the very least. And in the case of all of the Big Four, you’ll get access to an LTE connection (except for T-Mobile, where you’ll still need a local version for optimum HSPA+).

If you’re absolutely set on getting the Galaxy S III a few weeks or at most a couple of months ahead of your American friends, you’ll be happy to know that you can review and confirm your order before it ships out. At the moment Expansys is offering the phone in both Pebble Blue and Marble White, so pick your poison. And try to ignore those pangs of buyer’s remorse when it shows up on your carrier for $199 on contract the next week.