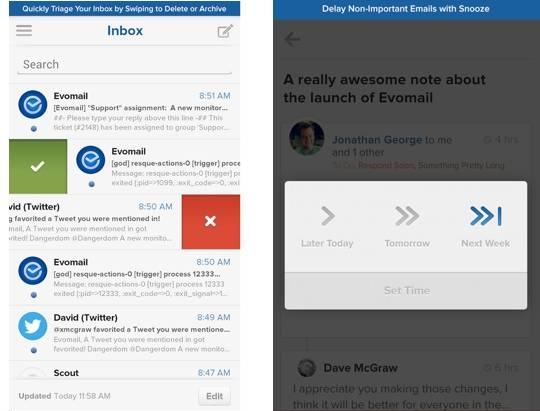 The Evomail email app was one that originally launched only for iOS. In fact, the original release of Evomail brought focus for the iPad, however as the app is now available for the iPhone — it has also come to Android. This is another productivity focused email app and it brings mention about how the developers “believe email isn’t broken, it just hasn’t kept up with the pace of change on the internet.”

Or in other words, the folks at Evomail are attempting to fix that. The app has landed in the Google Play Store and is available for free and with support for Android 4.0 Ice Cream Sandwich or later. Evomail is current sitting at version 1.0. As for those attempts at fixing email, Evomail has features to include the ability to snooze your email. This should be good for those who want an empty inbox, but also may need to revisit some of those messages they are trying to clear out.

The app also takes advantage of the swiping gesture and allows the user to swipe to archive, trash and label messages. And for better of worse, Evomail for Android does have built-in push notifications. The app also has support for folders and labels which should make it easy to keep things organized and properly sorted.

Those using the app will also find some of the expected goodies dealing with customization. For example, you will be able to set a personalized avatar, set a signature and also specify reading preferences and triage gestures.

Evomail has arrived for Android with support for Gmail and Yahoo accounts. The app also has support for IMAP accounts. At this time it is lacking support for POP3 and Exchange, however those are promised to arrive in the “next few weeks.” In the meantime, the app does look good and is easy to use and easy to navigate.