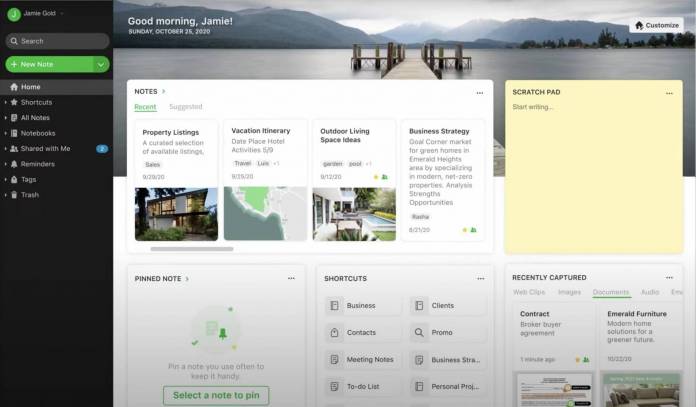 Even if they might have lost several users along the way because of new pricing structures, Evernote is still one of the most popular note-taking and productivity apps out there. A few months ago, they finally released their first major redesign in years and now they’re bringing the next major update for 2021. Users will now be able to see all the important and much-used features on their Home dashboard through widgets. Basic, plus, and premium users will be able to enjoy different widgets according to the plan they subscribed to.

When you open your Evernote software, Home is the first thing you’ll see which will be made up of the widgets that you chose or are available to you. For basic and plus users, there are three default widgets available. First, you have either Recent notes to continue those that you were working on before or Suggested notes which Evernote will give you the ones which it thinks you will want to open. The second widget is called Scratch Pad which lets you quickly capture thoughts, numbers, or anything you need to jot down immediately and then convert it to a note later on if needed. The third widget shows you recently captured Web Clips, Images, Documents, and Audio, and Emails.

For Premium and Business users, you’ll get all three as well as other additional widgets that have more advanced functionality. You get a Notebooks widget which you can also choose Recent or Suggested. You also have a Pinned Note section where you can easily see the note that you use every day like a to-do list or passwords list. There is also a Tags widget where you can see the most frequently used tags for easy access. Lastly, you’ll be able to access your shortcuts in the Shortcuts wdiget.

Another bonus for Premium or Business subscribers is that they’ll be able to resize, reorder, or remove the widgets so you can customize your Home dashboard according to the way you want it. You can also change your background image by choosing one from the pre-loaded gallery of images or you can upload your own as well. They say this is only the start and they’ll be bringing more features in the next few months.

The Evernote Home dashboard is rolling out to Mac, Windows, and Evernote Web users in the next few weeks. They said they will eventually roll it out to Android users too although no timetable was mentioned.